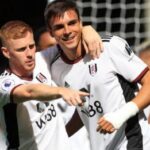 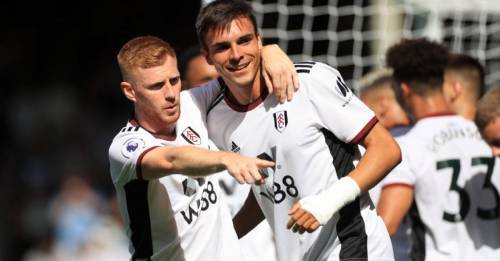 Summer recruit Palhinha thumped home a header from a well-worked corner in Fulham’s 3-2 derby win over Brentford at Craven Cottage on Saturday.

The £20million (€23 million) signing from Sporting Lisbon toasted his goal with a celebration to mark a week also including the birth of his child.

Palhinha put his thumb in his mouth and the ball up his shirt before being mobbed by his delighted team-mates in south west London.

And Whites boss Silva admitted the 27-year-old has made a quick adjustment to life in both London and the Premier League.

“His wife had a baby this week, and everyone’s delighted for him and his family,” said Silva.

“It’s important for him to feel that support from us, but it’s also important that he’s settled really well into our team and at the club.

“We knew when we were signing him that he would be a plus for us, for our squad; on the ball, off the ball, set pieces as well.

“And to see him scoring a goal and playing so well is great.

“It’s good to see the players take positives from something that we spent a long time on in the week.”

The hosts stormed into a 2-0 lead through Bobby Decordova-Reid and Palhinha, but Brentford fought back to level the scores in the second half.

Christian Norgaard volleyed home to cut the deficit, before Ivan Toney pounced to make it 2-2.

Toney saw two fine finishes chalked off for offside, handing big reprieves to a grateful Fulham, who were then able to steal all three points.

Striker Toney was a constant threat for Brentford once the Bees had come alive after a quiet first half-hour.

“The two disallowed goals, those finishes, they are fantastic,” said Frank.

“The way he collected the ball, the calmness of the finishing, it’s at a very high level.

“It’s fantastic to see, and our attacking play in general, I’m very pleased with that too.

“I will keep pushing us towards that, because I think we’re already seeing this season just how important it is to be scoring high numbers of goals to secure wins.”