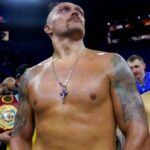 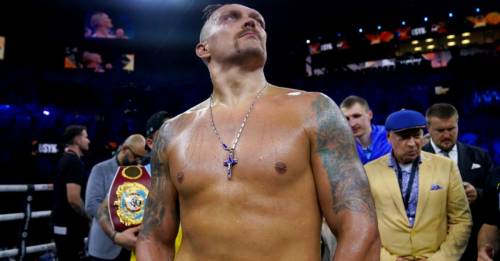 Oleksandr Usyk vowed to beat Tyson Fury after being challenged to a world heavyweight unification fight by the Briton in a crude rant posted on social media.

Usyk retained his WBA, IBF and WBO titles through a split decision against Anthony Joshua in Jeddah and now attention turns to the duel to be crowned the division’s number one.

Fury announced his retirement once again last week but the WBC champion insists he would reverse that decision if it meant he could face his only meaningful challenger.

“To be honest with you, after watching that both of them were s****. It was one of the worst heavyweight title fights I have ever seen, it was bulls***,” Fury said.

“I’ve just seen Joshua lose for the second time to Usyk, out of his depth. England has been relieved of its belts but there is a remedy and solution that I can suggest.

“If you want those belts back then send in the Gypsy barbarian, send me in and I will relieve the Ukrainian dosser of his belts like I did the last Ukrainian dosser (Wladimir Klitschko in 2015).

“But it’s not going to be cheap, if you want the best you have to pay.”

Pound for pound contender Usyk produced another boxing masterclass to overcome an improved Joshua, who was far superior from the passive fighter who lost his titles in London a year ago.

Yet even amid the rush to acclaim his genius, the 35-year-old Ukrainian insisted that if the showdown with Fury cannot be made, he will walk away from the sport.

“I am convinced he wants to fight me. That is what he is dreaming of every day,” Usyk said.

Joshua’s best round was the ninth when he pushed Usyk backwards with a series of blows, but the champion also detected a fatal flaw, saying: “I saw in his eyes that he was feeling victorious already.”

After reuniting with his family in Europe, Usyk will return home as a hero to a nation under siege from Russia’s invading armies and he has already been congratulated on social media by president Volodymyr Zelenskyy.

“This fight was extremely important for my country, my team and for me. I boxed for the whole country and half of the world,” said Usyk, who described Russian president Vladimir Putin as a “very weak man”.

“Now the whole world knows Ukraine is defending itself from the second biggest army in the world. And we stand strong and we give Russia a lot back.

“I want to say that some people in the world are underestimating what is going on in Ukraine – please open your eyes and see what is happening.

“Ukrainians never give up, we always go to the end. We always win in the end, we just need a little more time.”