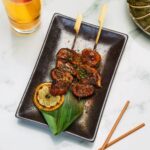 The More-Is-More Pizzazz of Gugu Room

The Filipino-Japanese izakaya Gugu Room, on the Lower East Side, has a few origin stories. The most romantic has to do with José Rizal, a national hero of the Philippines, who had a brief love affair with a Japanese samurai’s daughter, in 1888, during a six-week pit stop in Japan on his way to the U.S. (No one knows if the two lovebirds discussed fusing their cultural cuisines, though.) The most glamorous involves the actor Adrien Brody, a friend of one of the restaurant’s owners, who, I’m told, proposed the Japanese-Filipino mashup at a Manny Pacquiao boxing match, as a way to make Filipino food more accessible to a New York audience. My favorite story, though, is the plainest: “We wanted to bring Filipino night life to the Lower East Side,” the restaurant’s twenty-nine-year-old Manila-born chef, Mark Manaloto, told me. “Good dinner and party afterward.”

This helps explain the chaotic, merry décor—a silvery disco ball and a bust of José Rizal inside, a frenzy of red lanterns and cherry-blossom-adorned cabins outside. Gugu Room’s food is infused with some of this more-is-more pizzazz, with an eclectic, expansive menu that includes items portable enough to carry onto the dance floor. 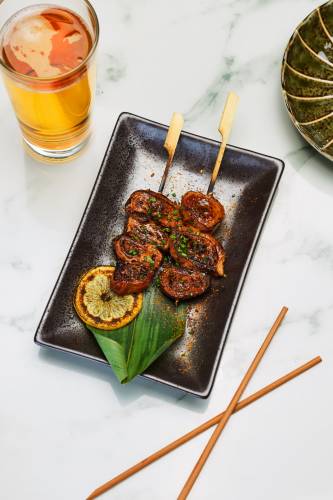 Isaw, or pig intestines, are wrinkly whorls that give off a wild musk that is inextricable from the organ’s primal umami.

When I consulted a server on what to try the other night, he didn’t pause before referring me to the skewers, the most memorable of which were porcine. It is customary to give short shrift to offal, but forsake the tenga, or pig ears, at your own risk. At Gugu, slices are marinated in banana ketchup and grilled on binchotan charcoal, lending their gelatinous exterior a crispiness that matches the wink of cartilage crunch on the inside. On the other end of the texture spectrum is the isaw, or intestines: wrinkly whorls that give off a wild musk inextricable from the organ’s primal umami. I could have eaten half a dozen skewers if I hadn’t wanted to leave room for the longanisa, a descendant of Spanish chorizo; the fragrance and the flavor of the meat—smoky and sweet, with notes of smoked paprika and garlic—were broadened by the heat of an open flame.

The most persuasive dishes unapologetically layer richness upon richness. Lengua gyutan, or beef tongue, soaked in a creamy mushroom gravy, seemed destined to cloy but turned out to be smooth, balanced, and savory. Similarly, the short-rib udon with bone marrow, which inspired an anticipation of heartburn, delighted from the first sip; punctuated by peppercorn, fish sauce, and white shoyu, the bulalo-style broth (traditionally, a heavy Filipino stew of bone-in beef shank) was voluptuous rather than unctuous. In fact, one of the choicest bites of the entire meal was an unladylike gnaw of the generous gristle on a bone followed by a spoonful of marrow-thickened soup, bobbing with cubes of cleansing daikon. 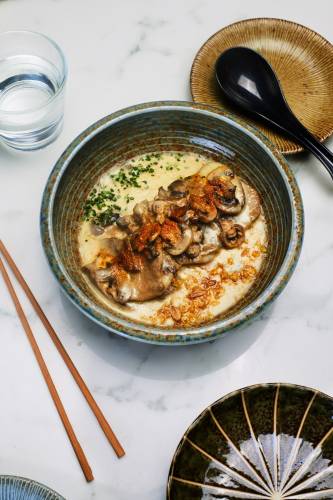 Lengua gyutan, or beef tongue, soaked in a creamy mushroom gravy, seemed destined to cloy but turned out to be smooth, balanced, and savory.

If the best things on the menu are organic celebrations of mostly Filipino inspiration, the less successful dishes taste like concessions to the fusion narrative. The chicken inasal, marinated and grilled, is pallid and without conviction, and the agedashi tofu, with its tired, gummy exterior, tasted like an afterthought.

There are no sweets on the Gugu menu, but there is an impressive and varied cocktail list that seems designed to prepare you for the after-hours dance floor. On a recent evening, while sipping a Wasabi Mar-Gari-Ta (tequila, calamansi honey, lime, wasabi), I watched a group of twentysomethings haltingly find their groove (presumably after drinking a respectable number of wasabi margaritas themselves) under the disco ball while I justified an order of fried intestines as a savory dessert. Around the room, skewers of meat were being delivered at a fast pace, some rapturously waved into the frames of gleeful selfies. The music was revving up, and the place was slowly if indubitably thrumming to life. It was close to 11 p.m. when I left—the end of my isaw spelling the end of my night—but the party had only just begun. (Dishes $6-$25.) ♦