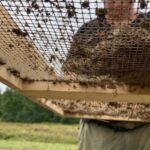 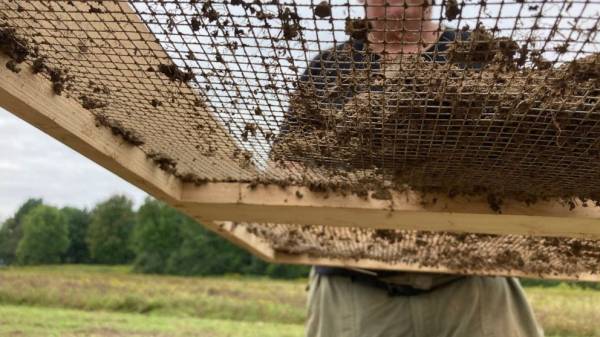 STILLWATER, N.Y. — Military veterans who carefully dug and sifted through clumps of dirt this month at a Revolutionary War battlefield in New York did more than uncover artifacts fired from muskets and cannons.

The meticulous field work gave the veterans — some dealing with post-traumatic stress disorder and physical injuries — a familiar sense of camaraderie and mission.

So while the archaeological dig at the Saratoga National Historical Park produced evidence from the tide-turning Second Battle of Saratoga, the teamwork behind the finds also benefited the veterans.

“We can all come together, share your battle stories, your deployment stories, and share your love for the history of what you’re digging,” said Bjorn Bruckshaw, of Laconia, New Hampshire, during a break on a recent hazy morning.

Bruckshaw, 38, was part of a three-person crew that spent the morning digging small holes at spots that set off metal detectors, then searching though the damp clumps to uncover … old nails, mostly.

But the self-described Revolutionary War buff was loving it.

Bruckshaw, an Army veteran injured in a roadside bombing in Iraq, is among 15 veterans taking part in the dig through American Veterans Archaeological Recovery, an organization that helps service members transition into the civilian world. While the group deals mostly with vets with disabilities, their focus is on what participants can do in the field instead of any injuries, said AVAR’s Stephen Humphreys.

“In the military you’re trained to be on time for everything,” Bruckshaw said. “So transitioning into the civilian world is a little bit harder for a lot of people. For me, it was a little bit difficult suffering from TBI (traumatic brain injury) and PTSD from my combat injuries. But you have support groups like these.”

National Park Service archaeologist William Griswold said the team is looking for artifacts that shed more light on the Battle of Bemis Heights, or the Second Battle of Saratoga, on Oct. 7, 1777. The American victory over British and German soldiers is credited with persuading France to lend crucial support the fight for independence.

The battle also burnished the heroic resume of future traitor Benedict Arnold, who was wounded in the leg and is memorialized here with a monument to his boot.

While maps and journal accounts from the time describe troop movements during that fateful battle, artifacts can pinpoint movements and provide a reality check.

For instance, historians know the British at Saratoga loaded their cannons with tin canisters packed with iron balls, or “case shot,” that spread out like shotgun blasts. Locations of the buried iron balls found here are being used to deduce more precisely where the cannons fired from.

“It’s a good way to check a lot of these textual sources because in the fog of battle, people often make mistakes or embellish things,” Griswold said.

Field work was first conducted here in 2019, with supervision from the National Park Service’s regional archaeology program. The American Battlefield Trust is a sponsor. Work was interrupted by the pandemic last year, but crews with shovels and metal detectors were back this month and wrapping up this week.

After retiring from the Air Force, Lukaszeski went to school to study archaeology. The 36-year-old from New York has already taken part in AVAR excavations to recover remains at WWII crash sites in England and Sicily through the group’s partnership with the Defense POW/MIA Accounting Agency. She plans to get her master’s degree and pursue archaeology professionally.

For others, the work is more a chance to learn about archaeology while having some fun.

Former Army Col. Tim Madere once hunted for weapons of mass destruction in Iraq. This month, the 68-year-old sifted dirt through a screen in a hunt for artifacts and shared laughs with other workers. The Savannah, Georgia-area resident said he has gotten over most of his PTSD, but believes you can never totally get rid of it.

He sees this sort of field work as a good way for people to manage it.

“You hear their stories and then you tell yours so that we kind of get a better appreciation of what all these Americans did to protect the United States,” he said. ”So it’s good to see other people, and they’re doing well.”

Previous : The Afghan refugee crisis has revealed the artificial limits of America’s will to welcome
Next : Lava spread raises fears of more damage on Spanish island