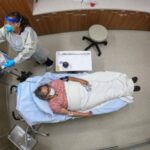 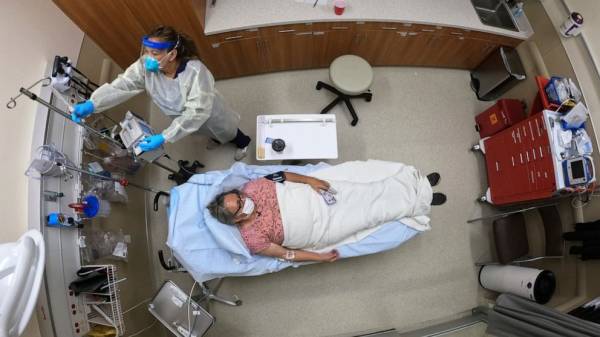 TANACROSS, Alaska — One Alaska Native village knew what to do to keep out COVID-19. They put up a gate on the only road into town and guarded it round the clock. It was the same idea used a century ago in some isolated Indigenous villages to protect people from outsiders during another deadly pandemic — the Spanish flu.

It largely worked. Only one person died of COVID-19 and 20 people got sick in Tanacross, an Athabascan village of 140 whose rustic wood cabins and other homes are nestled between the Alaska Highway and Tanana River.

But the battle against the coronavirus isn’t over. The highly contagious delta variant is spreading across Alaska, driving one of the nation’s sharpest upticks in infections and posing risks for remote outposts like Tanacross where the closest hospital is hours away.

The COVID-19 surge is worsened by Alaska’s limited health care system that largely relies on hospitals in Anchorage, the biggest city. It’s where the state’s largest hospital, Providence Alaska Medical Center, is overwhelmed with patients and was the first weeks ago to declare crisis-of-care protocols, meaning doctors are sometimes prioritizing care based on who has the best odds of survival.

Since then, 19 other health care facilities in Alaska, including Anchorage’s two other hospitals and Fairbanks Memorial, have also entered crisis care mode, something overtaxed facilities in other states have had to do, including Idaho and Wyoming.

“Even though we live here, we’re concerned about Anchorage and Fairbanks,” said Alfred Jonathan, a Tanacross elder. “If somebody gets sick around there, there’s no place to take them.”

While Alaska has contracted with nearly 500 medical professionals to help over the next few months, the ramifications are dire for those in rural Alaska if they need higher levels of care — for COVID-19 or otherwise — but no beds are available.

Sometimes those patients get lucky and get transferred to Fairbanks or Anchorage. Other times, health care staff are on the phones — in some cases, for hours — looking for a bed or facility that can provide specialty treatments like dialysis.

One patient who couldn’t get dialysis at Providence died, hospital spokesperson Mikal Canfield said. Dr. Kristen Solana Walkinshaw, the hospital’s chief of staff, said she knew a patient in an outlying community who needed cardiac catheterization and died waiting.

Options in Seattle and Portland, Oregon, also are being overloaded. One rural clinic finally found a spot for a patient from interior Alaska in Colorado.

Health officials blame the hospital crunch on limited staffing, rising COVID-19 infections and low vaccination rates in Alaska, where about 60% of eligible residents in the conservative state are fully vaccinated. According to data collected by Johns Hopkins University, one in every 84 people in Alaska was diagnosed with COVID-19 from Sept. 22 to Sept. 29, the nation’s worst diagnosis rate in recent days.

Officials say medical workers are exhausted and frustrated with what feels like a no-win effort to combat misinformation about COVID-19 being overblown and vaccines being unsafe. Some say it could have long-term effects — further shaking confidence in vaccines and treatments for other illnesses and making the longstanding pre-pandemic challenge of recruiting health care workers to the remote state more difficult.

Medical workers “describe the emotions of: ‘You hear a code is happening, someone is passing away,’” said Jared Kosin, president and CEO of the Alaska State Hospital and Nursing Home Association. “That is devastating. You never want to lose a patient. But in the back of your mind, you’re thinking, ‘OK, another bed is now available that is critically needed.’ And how do you balance those emotions? It’s gut-wrenching.”

In Tanacross, elders are encouraging people to get vaccinated, especially with facilities strained. The village is in a sprawling, sparsely populated region of eastern Alaska where the vaccination rate is under 50%.

Jonathan, 78, tells villagers that COVID-19 is here, and like the delta variant, is going to develop in other ways.

Those who “didn’t get vaccinated? Gosh, we’re afraid for them,” said Jonathan, who recently led a crew clearing dead and dying trees to reduce wildfire fuel and provide wood to heat homes.

His wife, Mildred, helped guard the gate into the community this year. Those restrictions ended this summer as the pandemic seemed to be improving. Now, she says she’s tired of outsiders calling their friends in Tanacross to scare them, claiming there are problems with the vaccines.

“I got both my shots, I’m alive and nothing’s wrong with me,” she said before piling bags of sanitizer, masks and nitrile gloves into her Prius to deliver throughout town.

Alaska, hailed early in the pandemic for working with tribal health organizations to distribute vaccines widely and quickly, was 25th in the U.S. for the percentage of its total population inoculated, according to Centers for Disease Control and Prevention data.

“The same standard of care that was previously there is no longer able to be given on a regular basis,” she said. “This has been happening for weeks.”

In rural Alaska, six Indigenous villages, including Tanacross, rely on the new Upper Tanana Health Center in the hub community of Tok, about a two-hour drive from the Canadian border. The staff treats who they can and moves those with more serious needs to Anchorage or Fairbanks, said Jacoline Bergstrom, executive director of health services for the Tanana Chiefs Conference, a consortium of 42 Athabascan villages spread over an area of interior Alaska nearly the size of Texas.

Emergency plans are in place to house people overnight if hospital beds aren’t available right away, clinic director Joni Young said. They’re usually flown because it’s a three-hour drive from Tok to Fairbanks and about seven to Anchorage.

“If for some reason, we can’t medevac out, we’ve been preparing since the beginning to help our patients if we need to,” Young said. “We’ve got cots before, stored here, and we have another building that we lease that we could use to separate COVID patients.”

The staff is putting in overtime, with nurses taking COVID-19 questions from callers and working weekends. They need to hire two urgent care registered nurses, but few have applied.

Joyce Johnson-Albert lay on a bed at the health center with an IV in her arm. She was vaccinated but got a breakthrough infection, she suspects from a hunting camp.

“I just hope the next few days, I’ll be getting a little better than now,” Johnson-Albert said as she received a monoclonal antibody infusion, given at the onset of COVID-19 to lessen symptoms. “It’s just hard to say. You can go either way.”

“However, I feel worried some days where we’re not sure when we’ll get more,” Cleary said. “For example, we’re down to, I think, five doses right now, and we could get more tomorrow or it might not be until next week. That’s one of the concerns we have living out here, is like, when are we going to get our next shipment?”

Republican Gov. Mike Dunleavy has faced criticism for not mandating masks and not endorsing vaccines as fully as some would like. He has encouraged people to get shots but said it is a personal choice. Others have accused him of pushing vaccines and peddling fear.

Providence hospital employees are having a hard time with the harsh rhetoric, Solana Walkinshaw said. One staffer got spit at leaving work, the chief of staff said.

Daisy Northway of the Tok Native Association knows how hard it is to advocate for vaccinations, saying she’s “talked till I’m blue in the face” trying to convince one of her sons.

The Athabascan elder said she urges people to get the shots but in a way that lowers the political fervor.

“We need to say, ‘Get vaccinated’ in such a manner that it’s helpful and not being criticizing for their beliefs,” she said.