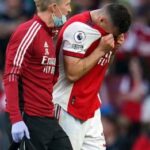 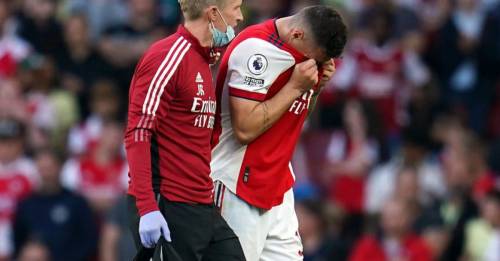 Mikel Arteta expects other players to step in and make the most of an unexpected opportunity to cover for the extended loss of midfielder Granit Xhaka.

Swiss international Xhaka is facing up to three months of rehabilitation after suffering significant damage to the medial ligament in his right knee during the 3-1 win over north London rivals Tottenham on Sunday.

Arteta hopes whoever is drafted into the side for Saturday’s trip to Brighton, with Ainsley Maitland-Niles having come on to replace Xhaka for the closing stages against Spurs, can rise to the challenge.

“It has to happen, there is no other choice,” the Arsenal boss said.

“There are players here that they are so willing to play, and they had opportunities this season already, and they have responded really well.

“It is another opportunity. It is a challenge for us because Granit is an important player, not only for the team, but for the squad — other players have to do it now.”

Emile Smith Rowe and Bukayo Saka were both on target against Spurs, with Arsenal racing into a 3-0 lead inside the opening 34 minutes.

Arteta hopes the young players can continue to be on the mark this season.

“When you are playing for top clubs, those individuals that are playing in forward positions have to decide football matches week in and week out, that is obviously related to scoring and assisting,” he said.

“It is a part of the game that we are trying to develop with them, and it is getting better, so, hopefully they will be able to do that.”

Arsenal defender Ben White is in line to face his old club, the England international having left the Seagulls for a club-record sale in the region of £50million (€43m) during the summer.

“I’ve been very impressed with how he handles the pressure and how he has handled the situation of coming through the Euros, (Arsenal) paying the big fee, the composure and the calmness that he has shown,” Arteta said.

“And as well, the willingness to learn, to improve, because he’s realised that he is still really young, still in the development process and there are things that he can improve.

“We are already enjoying (our time) together, and we have to continue like that.”

Arsenal are looking to build on their upturn in fortunes after opening the campaign with successive league defeats.

Graham Potter’s squad have maintained a promising start to the new season and are just a point off the top of the table heading into the weekend.

“They are playing well and getting the results that they deserve,” Arteta said.

“It is a really competitive match that we are looking ahead to, and we know the importance of it.”

Arteta added: “[Graham Potter] changed a little their way of playing. They have been getting good results and have been very consistent in the way that they play.

“Credit to them, and they are doing a good job.”

Previous : Pele thanks hospital staff after returning home following surgery
Next : Media company Ozy is shutting down as problems mount