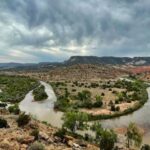 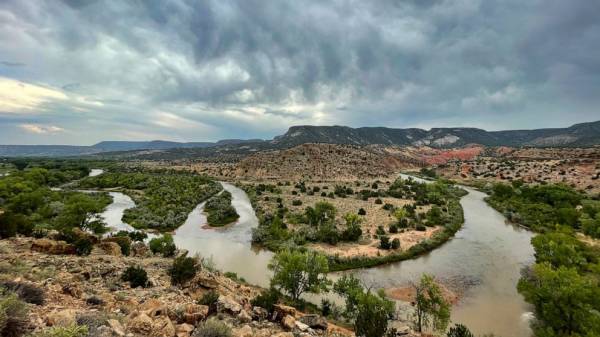 ABIQUIU, N.M. — At the edge of a sandstone outcropping, Teresa Leger Fernández looks out on the Rio Chama. The river tracks a diverse landscape from the southern edge of the Rocky Mountains through rugged basalt hillsides, layers of volcanic tuff, and the red and yellow cliffs made famous by painter Georgia O’Keeffe.

It’s also one of the many spots in the arid West facing more pressure as drought stretches into another decade and climate change piles on with warmer temperatures.

Once an acequia commissioner and now a U.S. congresswoman, Leger Fernández knows how hard it is to tell farmers they won’t get all the water they need — or maybe none at all.

She talks about the annual limpia, or cleaning of acequias in preparation for planting season.

“There was always a sense of accomplishment but now what we’re witnessing is we can’t do it all the time anymore because we don’t have the water,” she said during a tour with acequia officials. “And what you all are facing is not of your making, right? But you are having to work through the struggle of making whatever water is available work for everybody in the community.”

Some earthen canals didn’t get a drop of water this year, another example of parched Western conditions. Like many parts of the world, the region has become warmer and drier over the last 30 years, mainly due to rising levels of carbon dioxide and other greenhouse gases resulting from the burning of coal, oil and natural gas development and transportation.

Boat docks are high and dry at reservoirs around New Mexico, and Lake Powell along the Utah-Arizona line has hit a record low this year. A key Northern California reservoir that helps water a quarter of U.S. crops is shrinking.

For mayordomos — those who oversee acequias and ensure equitable water distribution — it has become a scramble.

Less snow falls, and warmer temperatures melt it sooner. Dry soil soaks up runoff before it reaches streams and rivers that feed acequias.

“We’re trying to be quick on our feet and adapt as much as we can, but it tests what we can really call resiliency,” she said, standing in shade at Santa Cruz Farm and Greenhouses in Espanola, where rows of chile, corn and blackberries bake in the sun. “We think we’re resilient, but resilient to what point? We’re bumping up against what those tipping points are.”

Federal water management policies have complicated matters as needs of cities and other users overshadow these Hispanic and Indigenous communities.

Their traditions are rooted in Moorish ingenuity first brought to Europe and then to North America via Spanish settlers. Those water-sharing ideas were blended with already sophisticated irrigation culture developed by Indigenous communities in what is now the southwestern U.S.

What developed were little slices of paradise, with gardens and orchards that have sustained communities for generations.

“It’s going to get worse before it gets better,” said Madrid, who would love nothing more than to grow watermelons again. “As long as we have reduced snowpacks and warmer springs, there’s going to be a certain point where we’re going to only be able to rely solely on rainwater and the monsoon season. That’s going to be bad.”

After back-to-back record dry summer rainy seasons, some Southwest areas enjoyed above average rain this year. But maps are still bleak, with nearly 99% of the West dealing with some form of drought.

Madrid said some parciantes — or acequia members — grow crops to supply regional farm-to-table programs and farmers markets. Others do it to subsidize income in a region where many live close to poverty.

When water-sharing compacts involving some of New Mexico’s largest cities were first negotiated decades ago, Madrid said communities along Rio Chama were left out. Now, as supplies are scarce, acequias around Abiquiu have been forced to seek state funding to buy water from downstream users. If none is available, they go without.

As long as Rio Chama flows above 140 cubic feet per second, water can be diverted by acequias. The flow usually nosedives in May, and rationing starts when it drops below 50 cfs. Aside from isolated spikes from storm runoff, the flow is now less than half that.

Madrid said acequias would benefit from permanent water storage in an upstream reservoir, which would need federal approval.

“The bottom line is we want to be self-sufficient,” he said. “We want to be able to take care of ourselves.”

Since 2017, more than $5.3 million has been funneled to dozens of community irrigation projects through New Mexico’s Interstate Stream Commission. Another $15 million in state capital funds have been earmarked for acequia projects since 2018.

Madrid said state and federal officials are starting to take notice as more acequias organize and speak out.

Leger Fernández noted that acequias represent some of the earliest forms of government that predate the U.S.

“What we’re trying to do now is preserve something that the parciantes and the mayordomos and commissioners have been able to do for 400 years,” she told the group gathered along Rio Chama.

Part of that means reimagining acequias without giving up the sense of community they command.

At Santa Cruz Farm, owner Don Bustos is growing crops in greenhouses in fall and winter when less water is needed and evaporation is reduced, he said.

In Taos, acequia leaders have bumped up annual cleaning to the fall so they don’t miss out on early runoff.

Madrid recalls a futuristic comic book storyline where an elaborate system of pipes and ration cards are used to control water. He’s hopeful that will never come to pass, but he and others acknowledged that acequias need upgrades to last another 400 years.

Garcia said she believes farmers, masters of soil health and seed savers always will be in New Mexico’s rural valley, they’ll just have to innovate.

“There’s still a lot of adaptations that we haven’t touched yet. We’re just barely seeing the beginning of it now,” she said. “We’re dealing with centuries-old ditches and in another century they might look very different, but I do think we’re still going to be here.”

Leger Fernández kept coming back to ideas of community and mutual respect as she walked through rows of blackberries at Bustos’ farm, never missing a chance to pick another berry. She also talked about gathering capulin — or chokecherries — and roasting blue corn to make atole — a traditional beverage — to share during the holidays.

“To me, acequias are the most perfect symbol of what we should be about: a community,” she said.