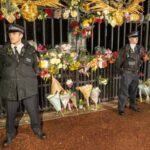 After a long, arid summer in Britain, during which the green expanses of London’s Royal Parks became bleached and desiccated, the first week of September brought a sudden change in the season, with the onset of heavy downpours by day, and nights rent by thunderstorms. On the morning after the Queen died, the pavement of Constitution Hill, the road that leads from Hyde Park Corner to Buckingham Palace, was smeared with sodden leaf-fall, trampled to a rusty mush by the crowds who lined up to lay bouquets at the wrought-iron gates beneath the Union Jack fluttering at half-staff. The scent of autumn was newly in the air—a palpable shift of pressure, a sense of something broken open after a long season of waiting.

All the previous afternoon it had been clear what was coming, as soon as a BBC news presenter appeared onscreen shortly after lunchtime with the news that doctors tending to the Queen at Balmoral Castle, her summer home in Scotland, were concerned for her condition. In a short while, it was reported that members of the Royal Family were making their way to be at her bedside, with television cameras trained upon the misty runway of Aberdeen airport. Huw Edwards, the presenter of the BBC’s flagship news program, took to the airwaves dressed in a dark suit and a black tie, a look that a responsible newsman doesn’t adopt lightly. When, just after six-thirty, Edwards sombrely relayed a statement from Buckingham Palace announcing that the Queen had died peacefully that afternoon, the shock lay not so much in that long-anticipated bulletin but in the titular formulation that followed in the next breath: “The King and the Queen Consort will remain at Balmoral this evening and will return to London tomorrow.” Seamlessly, the nation shifted from one reign to the next. 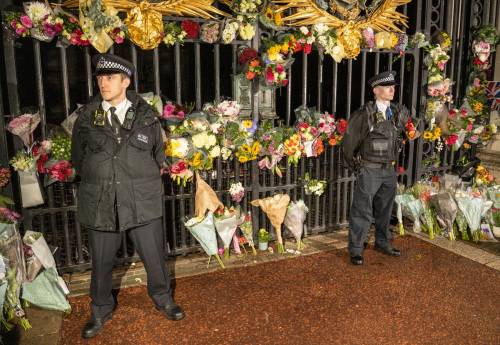 Police officers outside the gates of Buckingham Palace, where mourners placed bouquets on Thursday after the announcement of the Queen’s death. 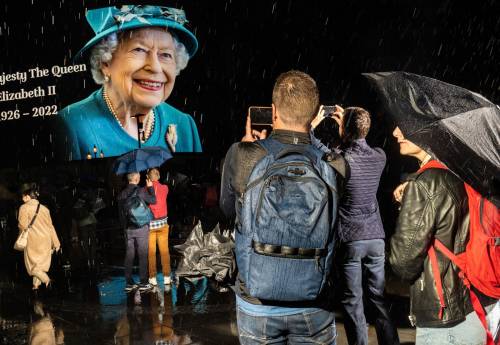 Thursday night, beneath black umbrellas defending against heavy showers, a steady stream of visitors had crossed the dark pathways of Green Park to the gates of the Palace, almost in silence. By Friday morning, the clouds were lighter, and the crowds of onlookers in Central London denser. The queue on Constitution Hill moved briskly. Visitors watched the passage of gleaming black horses and mounted soldiers from the Household Cavalry. Stationed outside the palace were their martial colleagues: members of what was until Thursday the Queen’s Guard, and has now become the King’s Guard. Overnight, the nation’s nomenclature has shifted. Britons are now paying taxes to HMRC, His Majesty’s Revenue and Customs. At Westminster, His Majesty’s Government is headed by a Prime Minister, Liz Truss, whom the Queen had appointed only two days before her death. 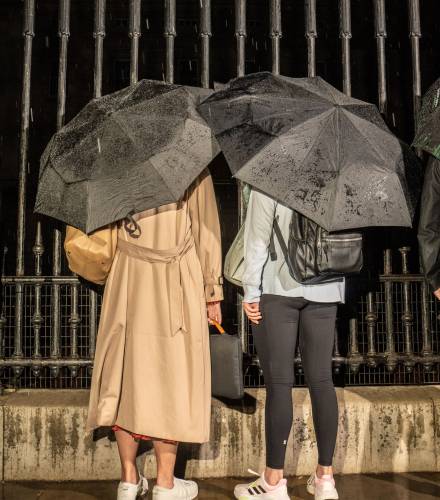 Two mourners fend off the rain with umbrellas outside Buckingham Palace on Thursday.

The mood outside the palace was sober but restrained. The Queen’s death was a cause for sadness, but it was not a shock, nor was it a tragedy. (We should all hope for such an end to a long life well lived, surrounded by loved ones, at home and at peace and declining heroic measures.) Kathleen Murray, who waited in line with a single red rose in her hand, had come to London from Nottingham to watch a cricket match; when that was postponed, she decided to visit the Palace instead. “I’ve always said that I’m not a huge Royalist, but when I heard the news yesterday, I was actually really upset,” she said. She explained that her eighty-seven-year-old mother, who is devoted to the Queen, has dementia; though Murray was sure her mother would understand that the Queen had died, she was not sure how long she would remember it. “She came to watch the Coronation when she was seventeen and spent the night on the street in the pouring rain,” Murray said. “When the Queen’s carriage passed, the Queen looked in the other direction. It wasn’t the Queen’s fault, but my mother was disappointed.” A moment on the Mall some seventy years earlier had become a story passed down, like an inheritance, or a crown.

Some of the flowers bore messages: “There are no words strong enough to describe how loved you were. You were the consistent in all our lives.” “You were an incomparable beacon of duty, faith, steadfastness, humility, humanity, and British values.” Children who later would be far too young to remember the day the Queen died, or the day after the Queen died, were being ferried past the Palace by parents. Sleeping babies were parked for an instant by the gates and photographed under the tolerant, watchful eye of a policeman. “Where’s the tiger?” one preschooler asked, perched on the rim of his sleeping sibling’s stroller. “What tiger, my love?” his perplexed caregiver asked. “The Queen’s tiger,” he replied. Wherever it is, it’s the King’s tiger now. 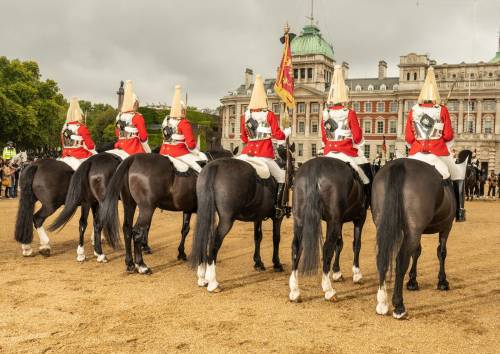 Mounted soldiers sit atop their steeds at Horse Guards Parade, near Buckingham Palace, on Friday.

John Miller, an actuary from Philadelphia who happened to be visiting London, was hovering at the guardrails before the Palace. Miller said he had planned to spend this day at the Palace watching the Changing of the Guard. Instead, he’d watched the visitors absorbing the larger change afoot. “It’s definitely interesting seeing so many people buying flowers for the Queen, to see thousands of bouquets lined up,” he said. Miller added, though, that he hadn’t seen anyone shedding tears. The exceptions—a weeping woman on bended knee, whose face was being frantically licked by a small dog with a Union Jack bandanna around its neck that yelped in poignant affection—were notable. This was a day of controlled grief, with a sense of the unsought inevitable.

Near the entrance to Green Park, a pathway was lined with an encampment of the world’s news media, stationed beneath rainproof gazebos. Between the tents and the Palace, flower beds had been planted with crimson geraniums, purple salvia, and variegated shrubs—blooming as if the summer’s drought had never happened. A team of gardeners from the Royal Parks were weeding a narrow border between the lawn and the railing. There would not be time before the funeral to plant anything new there, one tattooed, suntanned gardener explained, though if it were up to him, he would like to seed it with wildflowers. Another gardener paused from his labors to say it felt good to be doing something positive on the occasion of the Queen’s demise—that it felt like being part of history. He gestured at the strip of freshly exposed soil beneath his feet: “It’s life, isn’t it?” he said. The lawn had been raked free of dead leaves, a pile of which had been deposited in a garden-waste bag labelled “Tudor Environmental.” In the damp, muted air, the garden was pristine, at least until the next rain came. ♦ 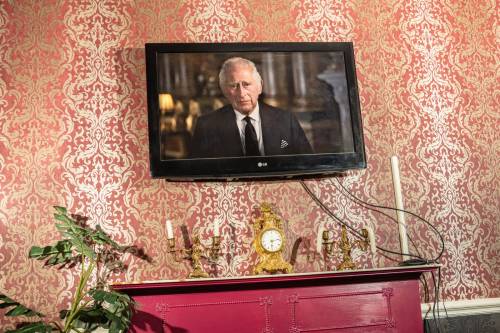 King Charles III delivers the first televised remarks of his reign on Friday.