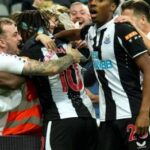 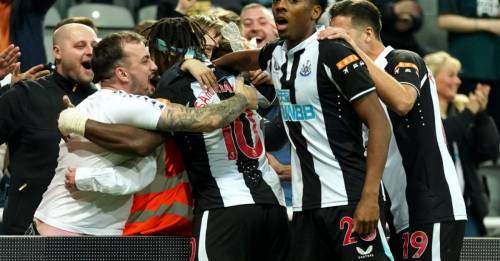 Allan Saint-Maximin’s brilliance failed to spare Steve Bruce further punishment as Newcastle had to come from behind to draw with Leeds.

The 24-year-old Frenchman blasted home a superb equaliser to cancel out Raphinha’s opener on a night when sections of the home support among a crowd of 50,407 at St James’ Park once again chanted for the 60-year-old to go.

A 1-1 draw at the end of a pulsating encounter left both sides still awaiting a first Premier League win of the campaign and with Bruce knowing his critics are far from placated, but equally that his players are playing for him.

Leeds took the lead with 13 minutes gone when Raphinha crossed from the left and Rodrigo attempted to back-heel the ball towards goal, but appeared to make little contact, in the process wrong-footing keeper Karl Darlow, who could only look on in horror as it sailed into his net.

Chants of “We want Brucey out” immediately rang around the stadium as the collective mood took a decided turn for the worse, and it was not improved as the home side laboured in their efforts to keep Leeds at bay.

The Magpies finally responded with Miguel Almiron dragging an attempt across the face of goal after Matt Ritchie’s cross had been only half-cleared and Joelinton firing straight at keeper Illan Meslier following Saint-Maximin’s blistering run.

However, Rodrigo steered a 25th-minute shot wide when he might have done better and England midfielder Kalvin Phillips was similarly inaccurate four minutes later with the visitors picking holes at will.

Darlow had to get down well to claim Mateusz Klich’s deflected strike, but opposite number Meslier needed the help of a post to keep out Ritchie’s 35th-minute effort after it had clipped a defender on its way to goal.

As the half-time whistle approached, Bruce abandoned the back three with which he had started, switching to a four and his side restored parity in the penultimate minute of the half.

Saint-Maximin, by far Newcastle’s most impressive performer on the night, collected Joelinton’s square ball on the edge of the box and side-stepped two prospective challenges before smashing a low drive across Meslier and into the net.

Bruce’s half-time address might have been markedly different had either Raphinha or Junior Firpo managed to finish off a stoppage-time break with his defenders at sixes and sevens, but they somehow survived.

The home side had a better, more resilient shape about them immediately after the break, although Daniel James was still gifted time and space to drag a 50th-minute volley wide and Darlow had to make a fine reaction save from team-mate Jamaal Lascelles’ headed clearance.

But with Saint-Maximin, Joelinton and Almiron repeatedly stretching the Leeds defence, the Magpies continued to carry a threat and Meslier had to save from the Frenchman at his near-post with 59 minutes gone.

Patrick Bamford should have restored Leeds’ advantage with 18 minutes remaining but shot tamely at Darlow from Rodrigo’s inch-perfect through-ball, and Meslier made a vital 84th-minute stop to deny Saint-Maximin what would surely have been the winner.

Previous : Matt Doherty confident Tottenham will start firing under Nuno Espirito Santo
Next : Anthony Joshua promises to do everything in his power to set up Tyson Fury fight