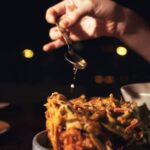 The Evolution of an Empire, at Momofuku Ssäm Bar

At this juncture in the evolution of Momofuku, a brand so expansive and brimming with personality—a good amount of which belongs to its iconoclastic founder, David Chang—that it spans four cities, ten locations, and a multi-platform media company, you might wonder if it’s due for a midlife crisis. If a ruby-red Beamer screams panic for a certain breed of middle-aged men, do soulless corporate digs for a guerrilla outfit turned establishment darling signal anxiety about identity for an iconic culinary empire? The question is posed by the latest incarnation of Ssäm Bar, Chang’s maverick sophomore effort, which once defined the East Village food scene and now resides in a glass-walled, L.E.D.-lit behemoth in the South Street Seaport. 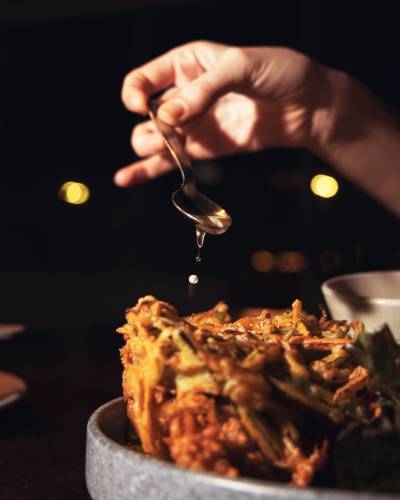 The crispy fish is Ssäm Bar’s take on fish and chips and resembles a hornet’s nest that’s been battered and fried.

This isn’t the first time a Momofuku restaurant has found itself inside a mall—the uptown Noodle Bar is in the Shops at Columbus Circle—but there is something incongruous about scanning a menu featuring eighty-eight-dollar Wagyu rib eye while watching dazed tourists glide up and down an industrial escalator. But change is not all bad. In the age of COVID, the mall’s high-ceilinged airiness and the occasional breeze wafting through its open patio, which overlooks the East River, are, if anything, welcome. 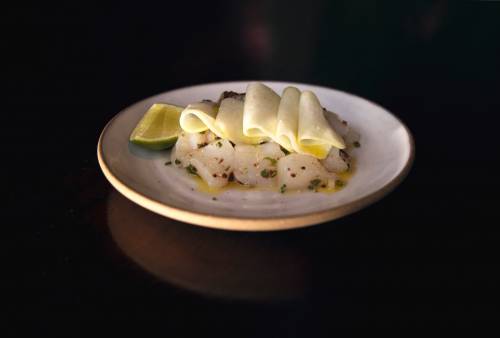 The sea scallops are coated in an umami bomb of a sauce, made from scraps of American country ham flavored with XO seasoning.

Chang built his reputation on his virtuosity with pork, so when Spicy Impossible Pork Rice Cakes was named as a special I assumed that “impossible” was a tongue-in-cheek self-appraisal of the dish’s delectability. As it turns out, the dish, my favorite on the menu, embodies my favorite Changian trait: imaginative versatility. The original Momofuku classic Spicy Pork Rice Cakes was, as Frank Bruni put it in his 2007 Times review, “gnocchi with a Korean passport,” swapping potato dumplings for rice cakes and ragù for Sichuan-peppercorn-laden meat sauce. The 2021 iteration is yet another reinvention, using plant-based Impossible Pork and whipped tofu to deliver a rare gastronomic gift that tastes more indulgent than it is. 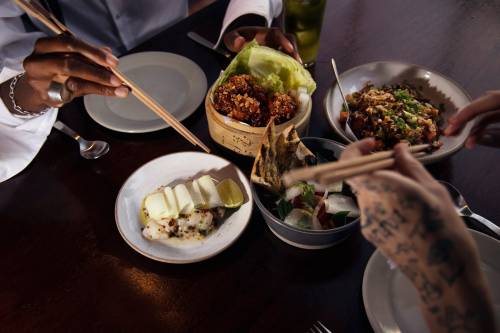 Other standouts are similarly shrewd couplings of past and present. The Heirloom Tomato Salad might sound forgettable, but, thanks to the interplay of some Momofuku mainstays—shiso leaf, emulsified garlic, yuzu kosho—it’s a bright, complex tangle that packs full-throttle heat. Of the three items in the raw bar, the right choice is the sea scallops, which are coated in an umami bomb of a sauce made from scraps of American country ham flavored with XO seasoning.

Ssäm means “wrapped” in Korean, and, more than a decade ago, in the East Village, it was the bo ssäm—an epic hunk of slow-roasted pork with a glorious caramelized crust, to be wrapped in lettuce with oysters, rice, and sauces—that catapulted the restaurant to its legendary status. By comparison, the crispy-fish dish, which resembles a hornet’s nest that’s been battered and fried, is effortful and ungainly. 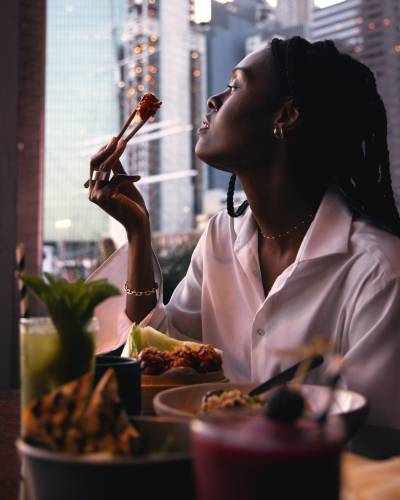 The standouts at Ssäm Bar are shrewd culinary couplings of past and present.

The most disappointing item on the menu also happens to be the summer’s No. 1 seller: Chili Jam Popcorn Shrimp. Crisp-edged and peanut-encrusted, the appetizer is unobjectionable if generic, a word that would likely be anathema to Chang, seemingly a violation of the Momofuku spirit. If its accessibility is a concession to the tourist-dense nature of Ssäm Bar’s new home, it’s also an indication of another kind of adaptability: Momofuku may be defined by its innovations, but its longevity depends, too, on a capitalist-minded democracy. As Momofuku’s C.E.O., Marguerite Mariscal, told me, “At the end of the day, it’s always the customers who decide.”

There are more changes ahead. A second floor will open soon, to accommodate additional indoor seating, and the tables will be furnished with countertop grills. A bigger, and hopefully more inspired, array of bo-ssäm dishes is rumored to be in the works. If Ssäm Bar, and Momofuku itself, has an identity, it’s likely an enduring attraction to the churn of evolution. It has survived multiple cycles of birth and rebirth, with more to come. In Changland, that’s mostly a good thing. (Dishes $32-$84.) ♦

Previous : Laurie Colwin’s Recipe for Being Yourself in the Kitchen
Next : Idaho reaches deal to reimburse hunters who kill wolves