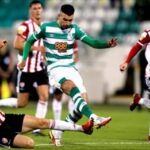 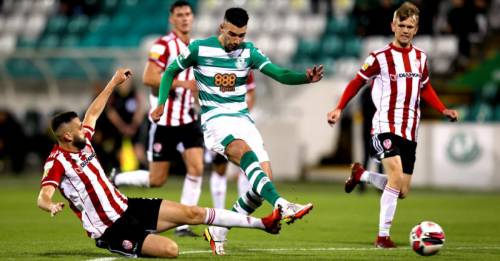 Shamrock Rovers maintained their nine-point lead at the top of the SSE Airtricity Premier Division on Friday night.

Stephen Bradley’s Hoops came from a goal down to beat Derry 2-1 at Tallaght Stadium.

After Lafferty got the visitors the opener just five minutes into the game, Rovers relied on goals from Lee Grace and Danny Mandroiu either side of the half-time whistle to see them over the line.

Meanwhile in Drogheda, Alfie Lewis got a win on the road for St Pat’s with his stoppage time goal.

The result keeps them second in the overall standing, while Drogheda struggle in sixth.

The final fixture of the evening between Finn Harps and Dundalk ended all square in Ballybofey.

Tunde Awolabi’s seventh and eighth league goals of the season for Harps helped them secure a 2-2 draw, with Michael Duffy and Patrick Hoban netting for the visitors.