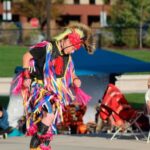 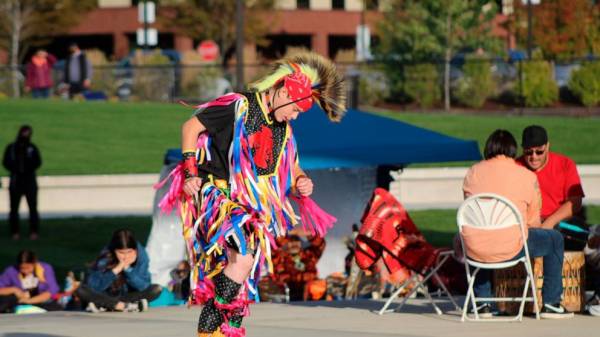 FLAGSTAFF, Ariz. — Indigenous people across the United States marked Monday with celebrations of their heritage, education campaigns and a push for the Biden administration to make good on its word.

The federal holiday created decades ago to recognize Christopher Columbus’ sighting in 1492 of what came to be known as the Americas increasingly has been rebranded as Indigenous Peoples Day.

For Michaela Pavlat, cultural interpreter at the National Museum of the American Indian in Washington, the day is one of celebration, reflection and recognition that Indigenous communities are fighting for land rights, for the U.S. government to uphold treaties, and for visibility and understanding.

“As long as you’re on Native land and stolen land, it’s Indigenous Peoples Day,” said Pavlat, who is Sault Ste. Marie Band of Chippewa Indians (Anishinaabe). “We have a lot of movement and a lot of issues we’re facing in our communities, and you can have that conversation every day.”

More than a dozen protesters linked arms and sat along the White House fence line Monday to call on the Biden administration to do more to combat climate change and ban fossil fuels. Others cheered and chanted in support from across the street as police blocked off the area with yellow tape and arrested the seated protesters.

The Andrew Jackson statue at the center of Lafayette Park was defaced with the words “Expect Us” — part of a rallying cry used by Indigenous people who have been fighting against fossil fuel pipelines. Jackson, a slave-owning president, forced Cherokees and many other Native Americans on deadly marches out of their southern homelands.

“Indigenous people have been on the front lines of protecting the land, the people, and it’s time for the government and these huge systems to do more,” said Angel Charley, of Laguna Pueblo in New Mexico, who was among the protesters.

At the Boston Marathon, race organizers honored 1936 and ’39 winner Ellison “Tarzan” Brown and three-time runner-up Patti Catalano Dillon, a member of the Mi’kmaq tribe. Interior Secretary Deb Haaland, a member of Laguna Pueblo, said she ran for missing and slain Indigenous people and their families, the victims of the boarding school era and the “promise that our voices are being heard and will have a part in an equitable and just future in this new era.”

Others gathered for prayers, dances and other commemorations in cities across the U.S.

President Joe Biden last week issued the first presidential proclamation of Indigenous Peoples Day, the most significant boost yet to efforts to refocus Columbus Day in recognition of the Italian explorer’s brutal treatment of people who already occupied what came to be known as the Americas.

About 20 states observe Indigenous Peoples Day by law, through proclamation or other action, along with cities and universities across the country.

Oregon recognized Indigenous Peoples Day on Monday, months after its Legislature overwhelmingly approved a bill in support of the change from Columbus Day.

In Wisconsin, Gov. Tony Evers joined the leaders from tribes in the state and issued a formal apology for Wisconsin’s role in Native American boarding schools era.

NOT JUST A CELEBRATION

The Smithsonian’s National Museum of the American Indian on Monday hosted a virtual conversation about mixed Black and Indigenous identity and how the struggles of one side sometimes get overshadowed by the other.

Joy SpearChief-Morris pointed to the Civil Rights movement and the Red Power movement, which included the Native American occupation of Alcatraz Island off the coast of San Francisco more than 50 years ago.

“Both groups supported each other, but we don’t really talk about the Red Power movement,” said SpearChief-Morris, who is African American and Kainai Nation (Blood Tribe) from Canada.

The panelists noted that Afro-Indigenous identity goes back generations.

“Everything that we do is to bring about Black liberation and Indigenous sovereignty on this land and to dismantle white supremacy and settler colonialism,” said Amber Starks, who is African American and a citizen of the Muscogee (Creek) Nation. “And I’d like to add racial capitalism”

Kyle Mays, an assistant professor at the University of California-Los Angeles who is Black and Saginaw Anishinaabe, acknowledged the work isn’t easy.

While Indigenous Peoples Day is “cool,” he said, “I don’t want a day for celebration. I want justice.”

——— Associated Press writers Zeke Miller in Washington, Jimmy Golen in Washington and Scott Bauer in Madison, Wisconsin, contributed to this story. Fonseca is a member of the AP’s Race and Ethnicity team. Follow her on Twitter at https://twitter.com/FonsecaAP

Previous : Clinton and Penny team up to write novel ‘State of Terror’
Next : High winds prompt PG&E to shut power to 25,000 in California