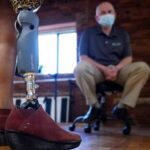 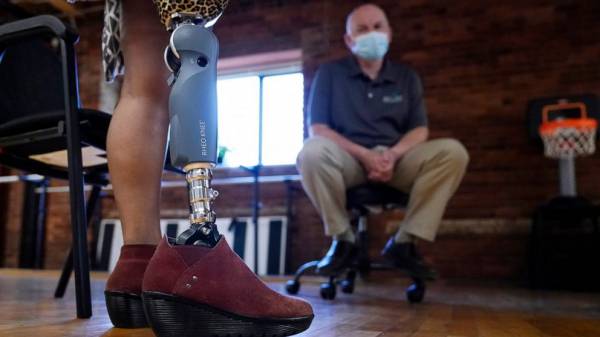 NEWTON, Mass. — She was orphaned during Rwanda’s genocide and lost much of one of her legs to childhood cancer, but Claudine Humure has dreams of giving back to her once war-torn homeland.

First, though, she needed a new leg to propel her on the next part of her journey.

The 29-year-old, who spent some of her formative years in Massachusetts, including receiving cancer treatment and her first artificial limb, recently returned to the state to get fitted with a new prosthesis.

At Next Step Bionics and Prosthetics in the Boston suburb of Newton on Monday, she strode purposely up and down the spacious facility and on the courtyard outside, giving it a final test run.

“It feels easier to walk on. I don’t know if it’s natural. It’s been so long I don’t remember what natural feels like,” Humure said to laughs.

The artificial leg she’s had the last four years took a beating on Rwanda’s hilly terrain. The knee joint no longer moved smoothly. Duct tape held together the socket connecting the artificial appendage to her surviving limb.

Humure’s new prosthetic — provided free by the clinic — features the latest in artificial leg technology, her longtime prosthetist said as he monitored and tweaked the device’s performance remotely.

The microprocessor-driven knee can quickly sense and respond as Humure shifts her body weight from one leg to the other, creating a more natural gait, Arthur Graham said. The device’s foot is also adjustable so she can easily transition from sneakers to high heels and other shoe styles.

There aren’t many places in the East African nation that can handle such technology, which costs more than $40,000 per unit. So Graham has provided Humure advice on how to maintain her prosthetics on her own over the years.

Humure said the experience inspired her to pursue a career in prosthetics. She’ll soon be enrolling in a graduate program at the University of Washington in Seattle, and hopes to eventually open a nonprofit clinic providing affordable prosthetics to fellow Rwandans.

The 1994 genocide, in which an estimated 800,000 people, mainly ethnic Tutsis, were slaughtered by extremist Hutus, left a large number of people handicapped, she said. There’s also been an increasing number of severe road accidents in the country of nearly 13 million people.

Yet many amputees are still making do with improperly fitting devices or self-made systems because of the high cost of quality prosthetics, Humure said.

“I have been privileged to wear some of the most advanced prosthetics that a lot of Rwandans do not have access to,” she said. “No one should be denied the right to stand on two feet and the ability to move around independently.”

Boston has played an outsized role in Humure’s life after her father was killed in the genocide and her mother died in childbirth shortly after. When Humure first came to the city, she was 12 years old, wheelchair-bound and living in an orphanage. She had most of her right leg removed to treat bone cancer, but needed further treatments as the cancer spread.

Partners In Health, the global health care organization founded by Dr. Paul Farmer, arranged to have her flown to Massachusetts General Hospital for chemotherapy. Doctors at the Boston institution also reconstructed her amputated leg so it could better fit into a prosthetic.

A Boston couple soon became Humure’s legal guardians, and she returned to attend high school and then Wheaton College in Norton, where she graduated in 2017 with a biology degree.

While at college, she interned at MIT’s Media Lab, helping with its research on advanced prosthetics. She also interned at Spaulding Rehabilitation Hospital, working with recent amputees, including some of the survivors of the 2013 Boston Marathon bombing.

Long since cancer-free, Humure has been living in Kigali, Rwanda’s capital, and working at the University of Global Health Equity.

“Yes, I went through a lot,” she says. “But I would not have gotten through anything without all the people who have supported me along the way.”