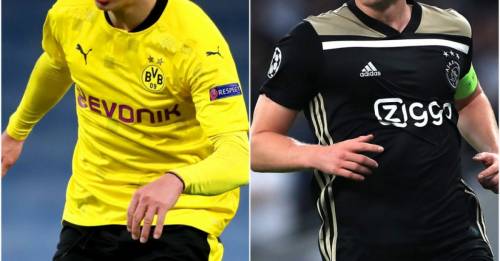 The queue for Erling Haaland continues to grow, with reports suggesting Liverpool are eyeing a summer move for the prolific Borussia Dortmund forward. The Liverpool Echo, citing Mundo Deportivo, says the Reds are looking to potentially beat the 21-year-old’s wealth of other suitors, including Manchester United, Real Madrid and Paris St Germain, to a deal.

Chelsea are believed to have a new number one target in the form of Juventus defender Matthijs de Ligt. The Daily Mirror reports Blues bosses have turned their attention to the 22-year-old Holland international, after the club were unable to secure Jules Kounde in the summer window.

Arsenal have suffered a blow in their pursuit of Club Brugge winger Noa Lang, according to the Daily Express. The paper says Italian giants AC Milan are preparing to rival the Gunners’ reported £20million offer for the 22-year-old.

The Daily Mirror says Barcelona are monitoring Brighton goalkeeper Carl Rushworth. According to the paper, Barcelona sent a scout to visit Walsall, where the 20-year-old is currently on loan, following a string of impressive performances. The Spanish club previously sent scouts to watch him as a teenager when he was on loan at non-league Worthing.

Antonio Rudiger: Bild reports Bayern Munich are interested in the Chelsea defender, but he would prefer to stay at Stamford Bridge.