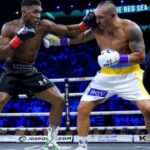 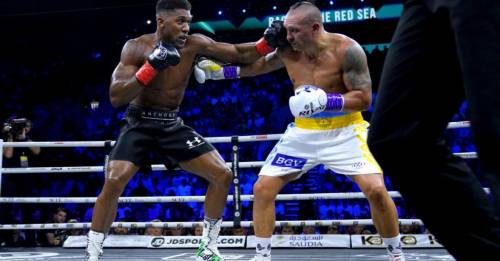 Anthony Joshua fell to another defeat at the dazzling fists of Oleksandr Usyk yet still found redemption by pushing the Ukrainian pound-for-pound star to the limit of his endurance.

Joshua was outworked to drop a split decision at Jeddah’s King Abdullah Sports City Arena with scores of 113-115, 115-113,116-112 conforming that he is now a peripheral figure among the heavyweight division’s elite.

But while Usyk retained the WBA, IBF and WBO titles to set-up the prospect of a unification clash with Tyson Fury, he was hurt on several occasions by an underdog who was transformed from the first meeting at Tottenham Hotspur Stadium.

Joshua lacked the gas or the class to reclaim his belts, but he went out on his shield in a thriller that atoned for his passive display in London nearly a year ago.

For a second time Usyk was operating on a different level, his movement and ringcraft keeping him away from the Briton’s most dangerous shots, while his accuracy and volume of work swept him to place him in charge on the scorecards.

Joshua is no longer a dominant force in the division and another disappointment was his angry reaction after the fight when he grabbed two of Usyk’s belts and dropped them out of the ring.

He also confronted the champion, asking him how he won, before then demanding the microphone to address the crowd.

“I am giving you my story. I was going to jail. I got bailed and started training my arse off, because if I got sentenced then I would not have been able to fight,” Joshua said.

“I could have done better, but it showed the hard work he must have put in to beat me. Please give him a round of applause as our heavyweight champion of the world.

“I’m not a 12-round fighter. I am a new breed of heavyweight. Mike Tyson, Sonny Liston – they say ‘he doesn’t throw combinations like Rocky Marciano,’ because I am 18 stone, I am heavy.

“It is hard work. This guy here is a phenomenal talent. We are going to cheer for him.”

Usyk’s victory was founded on resilience as much as skill as he weathered a sustained onslaught in the ninth round before finding a new gear in an all-action 10th that was sustained until the final bell.

It was a show of class from the southpaw genius, yet for all Joshua’s improvement under the guidance of new trainer Robert Garcia, he still only showed flashes of unbridled aggression that it was felt he needed.

Midway through the fight he landed a looping left to the body that forced a hurt Usyk on to the ropes but instead of following up he hesitated and the moment was gone.

Usyk, who was watched in the Ukraine on free-to-air TV, gave his homeland reason to cheer in the face of Russia’s invasion.

“I want to thank everyone who prayed for me and thank God for the help he gave me,” the two-weight world champion said.

“I devote this victory to my country, to my family, to my team, to all the military people who are defending the country. Thank you very much.

“Many generations are going to watch this fight, especially the round where someone tried to beat me hard, but I withstood it and turned in a different way. Thanks to God.”

Previous : Another 50 migrant deaths and an ever-climbing body count on the border
Next : Oleksandr Usyk vows to beat Tyson Fury after the Briton criticises Jeddah show