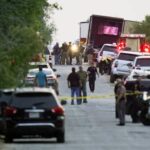 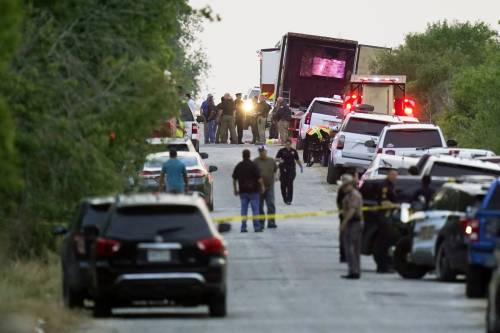 At least 50 migrants who were driven across the border in a tractor-trailer that was abandoned near San Antonio have died as of Tuesday, from apparent overheating.

Rep. Henry Cuellar (D-TX), whose district includes San Antonio, told CNN that the truck had passed through a checkpoint north of Laredo, Texas, on Monday. Among the victims were 22 Mexicans, seven Guatemalans, and two Hondurans, with at least two children. Most of the bodies were recovered inside or around the trailer, though some were found strewn across the road up to 75 feet away. At least 16 others were found alive, suffering from heat exhaustion and dehydration as temperatures exceeded 100 degrees, and taken to nearby hospitals, where three later died.

It’s the largest mass casualty event involving migrants crossing the US border in recent memory. But it’s by no means the only one: In the first six months of 2022, 290 people have died trying to cross the border, according to data from the International Organization for Migration, a division of the United Nations. Another 650 migrants died crossing the border in 2021, more than in any other year since the UN began tracking the data in 2014. Over the past two decades, the number of deaths is estimated to be just under 8,000 according to Border Patrol figures, though the actual number could be much larger since US immigration agencies have not kept complete records.

President Joe Biden, in a statement on Tuesday, blamed smugglers who have “no regard for the lives they endanger and exploit to make a profit” for the tragedy.

“This incident underscores the need to go after the multibillion-dollar criminal smuggling industry preying on migrants and leading to far too many innocent deaths,” Biden said.

Immigrant advocates have argued that it’s the result of restrictive US border policies that have failed at their intended purpose of deterring migration. Trump-era policies, including the “Remain in Mexico” policy (otherwise known as the Migrant Protection Protocols) and pandemic-related border restrictions, have remained in place, effectively closing the border to the vast majority of migrants and asylum seekers and exposing them to danger in Mexico.

Over the last six months, some 5,000 asylum seekers have been forced to stay in Mexico while awaiting their court hearings under the Remain in Mexico policy. The US Supreme Court is set to decide a case on whether the Biden administration can rescind that policy within the coming weeks. And the so-called “Title 42” policy has allowed the US to expel hundreds of thousands of migrants at the southern border under the guise of curbing the spread of Covid-19. The refugee advocacy group Human Rights First documented 8,705 reports of kidnappings and other violent attacks against migrants sent back to Mexico under those policies, as of January 2022.

Those policies haven’t dissuaded migrants from continuing to attempt to cross the border without authorization. Immigration authorities have encountered migrants at the border more than 1.53 million times this fiscal year so far, already well exceeding the 977,000 total encounters in fiscal year 2019, before the Title 42 policy went into effect. But it has driven migrants to rely more heavily on smugglers and to resort to increasingly dangerous means of attempting to cross the border.

“Cruel immigration policies like Title 42 have decimated our asylum system, and forced people to make unimaginable choices in their journey to seek safety and refuge in the US. Seeking asylum is a human right and President Biden should have ended Title 42 on day one of his administration,” the organization RAICES Texas, which was among the first legal service providers on the scene, said in a statement.

What happens now to the survivors in San Antonio remains to be seen. The migrants could be sent to immigration detention and placed in deportation proceedings. So far, three people have reportedly been taken into police custody, one of whom was the driver.

An informed electorate is essential to a functioning democracy. Vox aims to provide clear, concise information that helps people understand the the issues and policy that affects their lives — and it’s never been more vital than today. But our distinctive explanatory journalism is expensive. Support from our readers helps us keep our work free for everyone. If you have already made a financial contribution to Vox, thank you. If not, please consider making a contribution today from as little as $3.