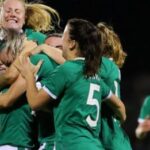 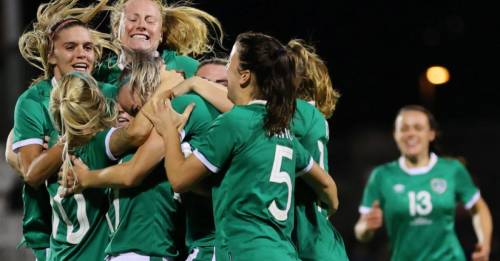 A second-half header from Louise Quinn secured a historic win for the Republic of Ireland as they overcame Australia 3-2 at Tallaght Stadium.

Vera Pauw’s snapped a losing streak by recording this deserved victory in front of 3,314 supporters at Tallaght Stadium against a team who finished fourth at the Tokyo Olympics.

It is Ireland’s biggest win over a higher-ranked opponent in over two decades and they set off to achieve it straight away with Amber Barrett unleashing a stinging shot inside two minutes.

Australia barely had a chance to catch their breath when debutant Lucy Quinn curled a powerful free-kick at goal, which struck the post and rebounded in off goalkeeper Mackenzie Arnold.

The game was back and forth in many ways, but Ireland were never outclassed by a team led by star striker Sam Kerr, who was marking her 100th appearance.

Mary Fowler twice got the visitors back into the contest, albeit with a bit of luck, but Ireland also profited when a strike from Denise O’Sullivan was deflected in.

At the end of a thrilling first half, it was 2-2 but Ireland will have felt that they were slightly on top. And they continued to play with confidence in the second period.

Louise Quinn powered in a header early in that half to reassert a lead that they would not surrender as Pauw’s team showed how recent performances against top-quality opponents stood to them.

Ireland, who were roared on by a vocal crowd, finished the game by battling for every ball and proving that they belonged in competition against such a good team.

Next up is their 2023 FIFA Women’s World Cup campaign, starting at home to Sweden on October 21st.