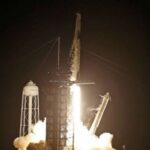 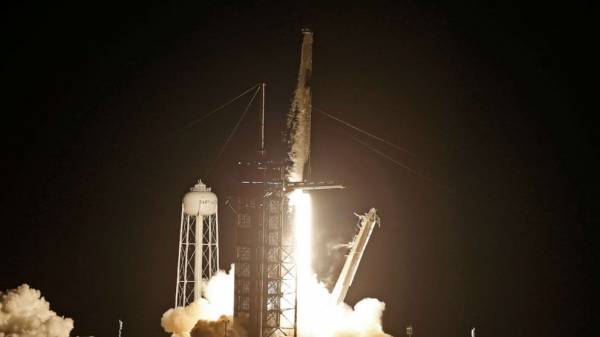 The Falcon 9 rocket took off as scheduled at the start of the five-hour window for launch at 8:02 p.m. ET. It reached orbit about 12 minutes later.

The crew said goodbye to their families, suited up and were driven in Teslas to Kennedy Space Center’s historic pad 39A Wednesday afternoon.

SpaceX’s Inspiration4 mission is the third recent billionaire-backed space launch, but it’s gone where neither Richard Branson nor Jeff Bezos could — into orbit.

SpaceX tweeted at just before 11 p.m. that the crew had reached an orbit of 535 km, or about 363 miles, the farthest any civilian has traveled from Earth.

That is even further than the International Space Station, which orbits at 240 miles.

Commanding the mission is 38-year-old billionaire Jared Isaacman, an experienced pilot. He founded a payment process company called Shift4 Payments and purchased all four seats on the flight for an estimated $220 million.

Isaacman wants this launch to benefit St. Jude Children’s Research Hospital. He has already donated $100 million to the cause.

One seat was reserved for 29-year-old St. Jude ambassador Hayley Arceneaux. Arceneaux is a bone cancer survivor and will be the youngest American to go to space as well as the first pediatric cancer survivor.

The third occupant will be Dr. Sian Proctor, 51, who said she has dreamed of going to space since she was a child. She burst into tears when she heard she was chosen as a member of the Inspiration4 mission.

She will become the fourth Black female American astronaut to travel into space.

The final crew member is Chris Sembroski, 41, an Iraq War veteran and engineer with Lockheed Martin, who won the final seat through a lottery that required a St. Jude donation to enter.

The four will orbit the Earth for three days with no set destination. They said they will conduct some science experiments while on board and auction off items in space for St. Jude.

There is always risk launching into space and coming home. While these passengers have been trained by SpaceX, they are not professional astronauts.

The SpaceX Crew Dragon will also be tested for the first time at this distance.

They cannot go much longer than three days without running low on fuel, food and water. And while past missions could make changes on the return because of bad weather on Earth due to astronauts on board, this ship won’t have quite as much flexibility.

After three days of orbiting Earth, they will prepare to splashdown in the Atlantic Ocean off the coast of Florida late Saturday or early Sunday.