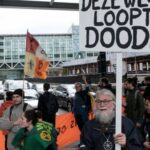 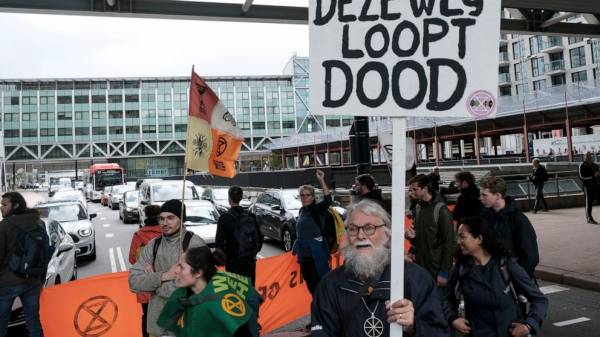 THE HAGUE, Netherlands — Hundreds of protesters from climate activist group Extinction Rebellion blocked a busy intersection Monday near the temporary home of the Netherlands’ parliament, marking the start of a week of protests the group plans in The Hague before a U.N. climate conference that opens on Oct. 31.

The demonstration started when protesters wheeled a yellow boat emblazoned with the Dutch words meaning “citizens decide” into the middle the road. Other activists walked to another nearby intersection and began sitting or lying down in the road as police looked on.

Police later said they detained activists who ignored police orders to leave three different locations in the city, saying in a tweet that they were causing a dangerous situation for traffic. It wasn’t immediately clear how many people were held.

A journalist covering the demonstration for national daily De Volkskrant was among those detained, the newspaper reported.

As the protest started, one man sat on a traffic island in the middle of the road holding a sign saying in Dutch “This is a dead end road,” while others parked a truck blocking the road. A woman held a sign saying: “Planet before profit.”

“We are grandparents, parents and children,” an activist standing in the truck told the demonstrators. “We are part of an international movement that fights for a livable and just planet.”

The Dutch demonstration came a day after thousands of people and 80 organizations took part in a protest in Brussels to push world leaders to take bolder action to fight climate change at the summit in Glasgow, Scotland.

Extinction Rebellion said 700 people were involved in the blockades. The group said in a message sent to reporters that it was calling for climate justice.

“Do what is necessary to stop loss of biodiversity and make the Netherlands climate neutral in 2025,” the group said.

One of the activists taking part called for closer cooperation between politicians and researchers to lay out clear goals for the Glasgow conference.

“I think policy makers should work directly together with climate scientists in order to really get a clear picture of what is necessary — what kind of measures are necessary and what kind of degrees of warming we can still accept and what is actually disastrous,” Mira Geirnaert said.

Previous : Instacart CEO says online grocery shopping has room to grow
Next : What was said as Lewis Hamilton clashed with Mercedes team over strategy call