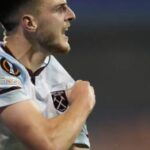 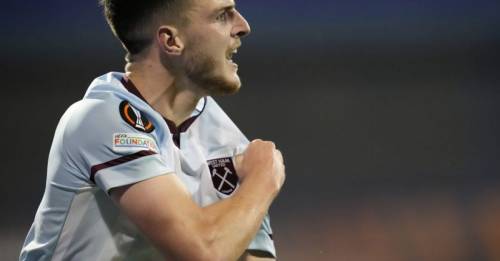 Declan Rice has vowed to add more goals to his game after marking his European debut with a sparkling solo effort.

The England midfielder’s 60-yard run and shot capped a memorable 2-0 Europa League win for West Ham away at Dinamo Zagreb.

The Hammers were already leading through Michail Antonio’s strike when Rice intercepted a Dinamo pass, rode a challenge on the halfway line and surged forward before finishing underneath Dinamo keeper Dominik Livakovic.

“It’s a part of my game I’ve been speaking about for so long. I know I can do it and I know I’ve got it in myself,” Rice told West Ham TV.

“It was a quick-thinking, instinctive process, because Michail pulled away and I was going to pass, but I thought: ‘If you don’t shoot you don’t score’.

“So I shot and luckily enough it went in the back of the net.”

Antonio opened the scoring in the 22nd minute, latching onto a weak Kevin Theophile-Catherine backpass, poking it past Livakovic and rolling it into an empty net.

Rice struck five minutes into the second half to wrap up a comfortable victory for West Ham on their debut in the group stages.

“There has been a real buzz around the place, the lads have known for so long what’s been coming and to come away in our first European night and get the win is very good,” added Rice.

“For the club and for the players it’s a great experience for us. We know how important it is to win these kind of games. We knew it would be tough.

“We want to get as many points on the board as quickly as possible and wrap up qualification. We’ve got Rapid Vienna next, but Manchester United first, so focus turns to that now and then Europe after that.”