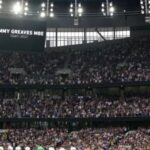 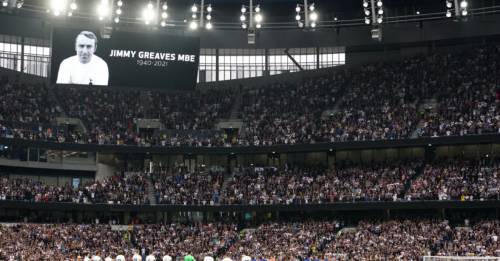 Tottenham and Chelsea came together on Sunday to remember their former striker Jimmy Greaves after he died aged 81.

Greaves had suffered a stroke in May 2015 which left him wheelchair-bound and with severely impaired speech. He had also suffered from alcoholism and quit drinking in 1978.

The Premier League club said in a statement: “We are extremely saddened to learn of the passing of the great Jimmy Greaves, not just Tottenham’s record goalscorer but the finest marksman this country has ever seen. Jimmy passed away at home in the early hours of this morning, aged 81.

Both Spurs and Chelsea remembered Greaves in their Premier League game at the Tottenham Hotspur Stadium on Sunday afternoon, which the visitors won 3-0, with the players wearing black armbands, while former team-mates including Martin Chivers and Steve Perryman were in attendance.

A minute’s applause was held before kick-off in north London and prior to Sunday’s other two top-flight games – West Ham v Manchester United and Brighton v Leicester.

Greaves scored 44 goals in 57 senior appearances for England – fourth highest in Three Lions history. He was a member of the 1966 World Cup-winning squad, but famously did not feature in the final victory over West Germany.

A shin injury had seen him replaced in the side by Geoff Hurst at the quarter-final stage and, although he was fit for the final, Alf Ramsey’s decision not to change a winning side was vindicated by Hurst’s hat-trick on the day.

Greaves’ career began in the junior ranks at Chelsea and he turned professional in May 1957, scoring on his Blues debut and racking up 132 goals in total for the club.

His return of 41 goals from 40 games for Chelsea during the 1960-61 season remains a club record.

At the end of that campaign Greaves left Stamford Bridge to sign for AC Milan, but spent only a few months in Italy before joining Spurs in December 1961 to play in Bill Nicholson’s successful side.

The Tottenham statement continued: “Although we had just won the ‘Double’, there’s no question that Jimmy’s arrival in N17 made us an even better team.

“He was a natural goalscorer, always in the right place at the right time to add the finishing touch to another well-worked move, while he could also create his own goals, as he did on numerous occasions by gliding past defenders and passing the ball into the back of the net.

“He possessed immaculate ball control, great balance and such composure in front of goal that he rarely spurned an opportunity.”

After nine years at White Hart Lane Greaves joined West Ham – the club closest to his east London roots – in 1970.

Although it would not prove a happy stay at Upton Park, the 13 league goals he scored for the Hammers took him to 366 goals in Europe’s top five leagues.

That stood as the all-time record until it was eclipsed by Cristiano Ronaldo during Real Madrid’s superb 2016-17 season.

Greaves took a break from the game after leaving West Ham, but later played in the lower divisions, turning out for Brentwood, Chelmsford, Barnet and Woodford Town.

After ending his playing career, Greaves starred alongside former Liverpool striker Ian St John in the popular ITV programme ‘Saint and Greavsie’ between 1985 and 1992, which saw him become a popular pundit.

After a long campaign for his England achievements of 1966 to be recognised, Greaves finally received a World Cup winners’ medal in 2009; five years later he sold it in an auction at Sotheby’s for £44,000.

In later life, Greaves endured health problems, including a minor stroke in 1992 from which he recovered. However, a serious stroke in May 2015 left him unconscious for six days in intensive care, and he remained in a wheelchair for the rest of his life.

Milan tweeted ahead of their Serie A game with Juventus: “We are deeply saddened to learn of the passing of our former player Jimmy Greaves. Our hearts go out to his friends and loved ones on this day of mourning.

“Although our time together was short, we’ll forever cherish the memories. Farewell, Jimmy.”

Previous : Roy Keane says Chelsea against Tottenham was like watching ‘men v boys’
Next : The fall equinox is Wednesday: 8 things to know about the first day of autumn