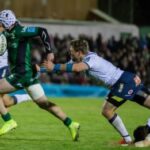 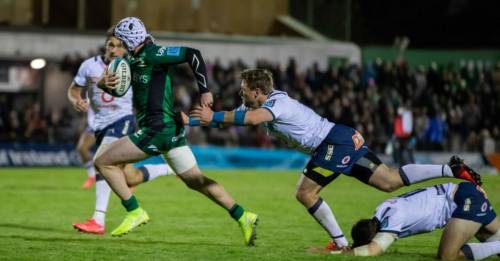 Mack Hansen lit up the Sportsground with an early try-of-the-season contender as Connacht broke clear of Vodacom Bulls to claim a 34-7 bonus-point win in the United Rugby Championship.

Lizo Gqoboka’s second-minute try was cancelled out by a well-taken Tiernan O’Halloran effort. Jack Carty converted and kicked a penalty to make it 10-7 at half-time.

Still reeling from last week’s deflating defeat to Leinster, the Bulls made a flying start in Galway.

Connacht hit back in the 15th minute, a well-driven maul splintering the defence before slick hands in midfield put full-back O’Halloran over and Carty levelled with the conversion.

Both teams left chances behind them, the hosts narrowly missing out when John Porch’s score was ruled out following a TMO review for a forward pass by Daly.

Arno Botha was guilty of going off his feet just as the Bulls were poised to score in the 28th minute. In the end, a Carty penalty managed to split the sides.

Early in the second half, Daly finished powerfully past Ruan Combrinck after Connacht had worn down the visitors’ defence, Carty’s conversion making it a 10-point lead.

Then it was Hansen’s turn to gobble up a Bulls kick and break free from 60 metres out. He cut in from the left, beating the cover to draw the biggest cheer of the night on his home debut.

The try stood – a potential block was ruled out – but Carty, who had a fine game in attack and defence, hit the post with the conversion.

It was a frustrating night for Bulls captain Marcell Coetzee and his team-mates, who struggled with their discipline at times.

As the rain came down, Carty released Farrell for a free-flowing fourth try before Daly bludgeoned his way over right at the death.

Previous : Marcelo Bielsa insists Leeds confidence is high despite winless start to season
Next : Shamrock Rovers stay top of the table with win over Derry City