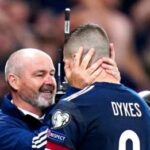 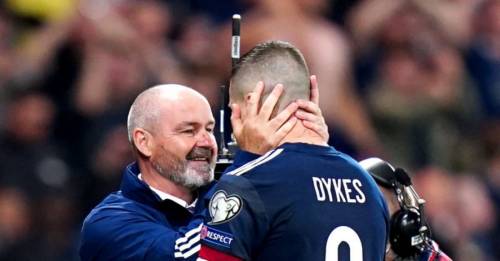 Steve Clarke admits he prayed that referee Szymon Marciniak would use VAR to give Lyndon Dykes the goal that helped Scotland to a dramatic 3-2 World Cup qualifying win over Israel.

Eran Zahavi put the visitors ahead at a sold-out Hampden Park with a curling free-kick in the fifth minute before midfielder John McGinn levelled in the 29th minute with a drive.

Munas Dabbur restored Israel’s lead two minutes later and Dykes had a penalty saved by keeper Ofir Marciano just before the interval, but then had the ball in the net again, only for it to be initially ruled out for a high foot as Ofri Arad challenged.

Polish official Marciniak eventually ran over to his pitch side monitor and awarded the goal, to the delight of Clarke and the Tartan Army, before Scott McTominay bundled in a McGinn corner six minutes into stoppage time for three crucial points which keep the Scots in second place in Group F and on their way to a play-off spot.

Clarke said: “Initially, from the technical area, I am looking at it and thinking it was a foul because the referee chalked it off.

“I turned to my bench and they are telling me straight away that there is no contact, so I’m praying that the referee goes to look at it on the monitor because I had a feeling when he went to the monitor that we would get the goal.

“My games in charge of Israel have always been quite tight affairs. But the fact that we conceded an early goal, a soft goal, giving a free-kick away at the edge of the box because Zahavi can do what he does as he is top quality.

“That changes the dynamic of the whole game so it was difficult for us to get back into it.

“Eventually we made some passes and eventually we got John McGinn free at the edge of the box and made it 1-1. Then we shot ourselves in the foot again and that is two big blows to take.

“We managed to put ourselves into some kind of contention going into the break and then we get the penalty and Dykes misses.

“I told them at half-time if you do want to lose the game you are doing it in the perfect fashion.

“The talk at half-time was really about having to play our own way, with more tempo, more ambition, control the game better and we did that from the start of the second half more or less until the 96th minute and we got our reward.”

I told them at half-time if you do want to lose the game you are doing it in the perfect fashion.

The Scots are on 14 points behind runaway leaders Denmark ahead of a trip to the Faroe Islands on Tuesday, where three points will be expected.

Clarke was keen to keep a lid on the Israel celebrations, saying: “I’ve said it to the players, it is only three points tonight.

“It was a great night, exciting, we are all happy that we are still in control of the play-off position. But now we have to go to the Faroes and make sure that we cement this result with another win, so that’s our goal.”

Disappointed Israel boss Willi Ruttensteiner said: “In the first half we were excellent but we lost the intensity, they held it.

“The pressure came more and more in the second half and from a corner kick we lost the game.

“Scotland, with the players they have and the leagues they play in, helped the intensity, this we couldn’t do. The dressing room is disappointed.”