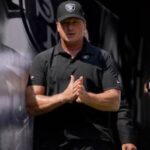 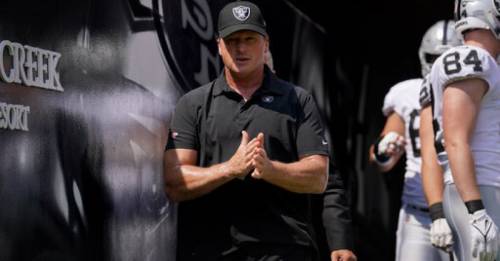 Jon Gruden said on Monday he has resigned as head coach of the Las Vegas Raiders after the New York Times reported he had used racist, misogynistic and homophobic language in emails over several years.

The emails mocked the drafting of a gay player in 2014, the hiring of women referees, tolerance for player protests aimed at promoting racial justice and the league’s emphasis on reducing concussions, the Times reported earlier on Monday.

A league source confirmed the accuracy of the report to Reuters.

“I have resigned as Head Coach of the Las Vegas Raiders,” Gruden said in a statement.

“I love the Raiders and do not want to be a distraction. Thank you to all the players, coaches, staff, and fans of Raider Nation. I’m sorry, I never meant to hurt anyone.”

Raiders owner Mark Davis said in a statement he had accepted Gruden’s resignation without elaborating.

The emails came to the NFL’s attention during a review of workplace misconduct at the Washington Football Team that was completed this summer.

Gruden’s emails were sent to Bruce Allen, the former president of the Washington Football Team, and others while Gruden was working as an analyst for ESPN, according to the Times.

On Friday the NFL called an email by the Super Bowl winning coach in 2011 that included a racist slur directed at NFL Players Association (NFLPA) chief DeMaurice Smith, “abhorrent”.

Gruden said he regretted the email but said he did not have “a blade of racism” in him.