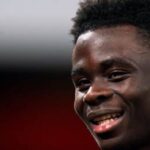 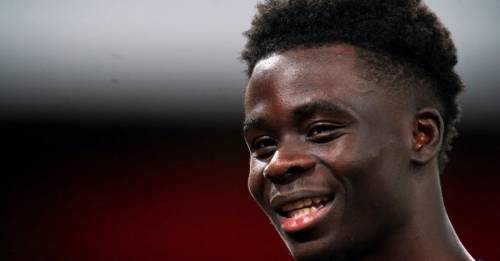 Bukayo Saka insists Arsenal’s north London derby victory over Tottenham proves they have what it takes to win silverware this season.

In Saka and Emile Smith Rowe, the Gunners had two academy graduates who both scored and assisted in the 3-1 win — Pierre-Emerick Aubameyang also on target before Son Heung-min struck a consolation for the visitors.

Arsenal had been bottom of the table ahead of September’s international break, while Spurs were sitting pretty at the top of the Premier League.

Sunday’s win, however, highlighted the change in fortune for the near-neighbours as Arsenal moved above their rivals.

While manager Mikel Arteta has faced criticism following three defeats at the start of the campaign, Saka feels their performance against Spurs shows Arsenal can have a successful season.

“We can achieve anything, no matter what age,” he said of a starting line-up with an average age of just over 24.

“With age comes experience but we have a lot of experience in this squad anyway which helps us every day and teaches us.

“I believe we have a lot of quality and enough experience to achieve a lot. We’re going to take it game by game but if we play like this we have enough quality to win trophies.”

Saka revealed he and Smith Rowe had spoken about their excitement of playing a north London derby in front of a full Emirates Stadium crowd.

“I’m just so happy for him. We spoke yesterday about what it would mean to score in a north London derby because we both grew up supporting Arsenal.

“At breakfast we spoke about this, about how massive it would feel to score in a north London derby.

“When Emile scored the first goal, I looked him at him and we remembered the conversation. When I scored, he looked at me so it’s a very, very special feeling for both of us. I’m so happy we could do it together.

“It’s very nice to share the memories with him. Even if he scored and I didn’t, I’d still be very happy for him but the most important thing is we won and got the three points and everyone can go home happy.”

After a fine start to life as Tottenham head coach, Nuno Espirito Santo will already be feeling some pressure after Spurs conceded three goals in three successive league matches for the first time in 18 years.

Defeats to Crystal Palace and Chelsea preceded their derby day disappointment but captain Hugo Lloris believes Tottenham are better than recent showings – while their impressive start to the season may also have been a false dawn.

“Even after three wins there was a lot of things to correct and improve,” he said when asked where Spurs are at.

“The truth is probably in between. But after six games, nine points is not enough. That’s clear.

“In terms of performance, we need to step up as a team and we need to increase our performances. Again, it’s individual and obviously collective.

“It’s always painful to lose a derby, it doesn’t matter the way.

“They made a lot of damage by their transitions, they created a lot of chances. The manager changed a few things at half-time, he brought on two more players and I think the dynamic of the game changed a little bit.

“We were much better, much stronger, much more stable in the middle of the pitch and we took control of the game. But at 3-0, the way is too far to come back, even in the Premier League where everything is possible.”