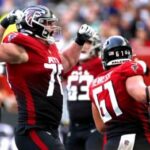 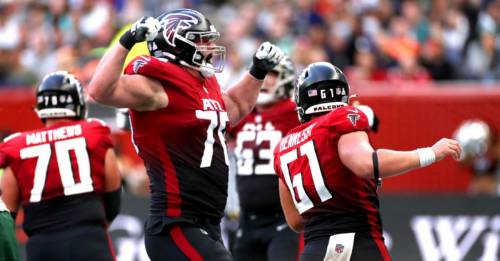 Rookie tight end Kyle Pitts scored his first NFL touchdown as the Atlanta Falcons secured their second win of the season by beating the New York Jets 27-20 in London.

The NFL returned to the UK’s capital for the first time in two years and Pitts produced a breakout game at Tottenham Hotspur Stadium, where he had nine catches in all for 119 yards.

The Falcons made a fast start despite temporarily losing running back Cordarrelle Patterson for a concussion check early in the first quarter.

Rookie Jets quarterback Zach Wilson threw an interception to Jaylinn Hawkins but Hurst fumbled the ball back two plays later and Matt Ammendola’s 31-yard field goal finally got the Jets on the board – but Koo extended the Falcons’ lead to 20-3 with a 52-yard field goal with the last play of the first half.

The Falcons’ first-half superiority was reflected in the fact they had made a total of 251 yards compared to the Jets’ 80 but the second half was a different story.

The Jets hit back early in the third quarter with their opening touchdown of the match when Ty Johnson rushed in from a yard out, though Ammendola’s attempt at the extra point struck an upright to leave the score at 20-9.

Johnson’s first touchdown of the season had been set up by fellow running back Tevin Coleman, who returned a kick from his own six-yard line deep into the Falcons’ half.

The Jets hauled themselves right back in it with just under seven minutes to play when running back Mike Carter’s two-yard rush secured them their second touchdown.

The two-point conversion attempt was successful via Wilson’s pass to Jamison Crowder and with the Jets now trailing 20-17, the momentum appeared to have shifted.

But the Falcons hit straight back and running back Mike Davis was shoved over for a three-yard touchdown, with Koo’s extra point making it 27-17 with just over two minutes left to play.

Ammendola made a 49-yard field goal in the closing moments but the Falcons triumphed 27-20.