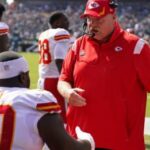 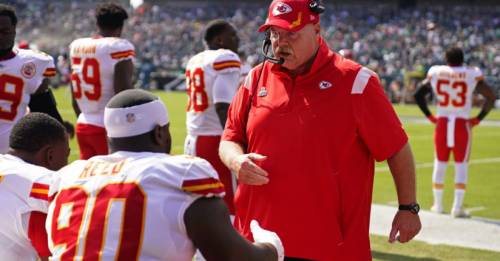 The 42-30 victory saw Reid become the first coach in the competition to win 100 games, including play-offs, with two franchises.

Patrick Mahomes threw five touchdowns as the Chiefs bounced back after successive losses to the Baltimore Ravens and the Los Angeles Chargers.

The Carolina Panthers’ 100 per cent start to the season came to an end as they were beaten 36-28 by the Dallas Cowboys, for whom Dak Prescott produced a four-touchdown display.

The Indianapolis Colts secured their first win of the campaign as they won 27-17 against the Miami Dolphins, and the New York Giants got off the mark as well with a 27-21 overtime victory against the New Orleans Saints.

The New York Jets also triumphed in overtime for a first win of the season as they overcame the Tennessee Titans 27-24.

The Detroit Lions remain winless following a 24-14 loss to the Chicago Bears and the Buffalo Bills beat the Houston Texans 40-0 at Highmark Stadium.