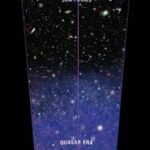 We can’t see the Big Bang directly. But a future telescope could.

A telescope is like a time machine. When astronomers peer out into the vast distances of space, they’re also looking back in time. That’s because faraway light takes a long time to reach us. When light from distant galaxies enters our telescopes, it’s like a fossil of a time long gone.

Just as scientists study fossils on Earth to understand bygone eras, scientists can chart the evolution of the cosmos by looking at starlight of various ages — but there’s a limit to how far back in time we can see.

“We are looking for the first light that turned on at the very beginning of cosmic time,” says Caitlin Casey, a UT Austin astronomer who has been approved to use the Webb to look for this light.

This is an epic quest. Humans have never before had the technology to see this first light. It will teach us a lot about how our universe formed, and why it looks the way it does today.

But even this first starlight does not represent the beginning of time. The Big Bang occurred hundreds of millions of years before starlight. For most of that time, the universe was shrouded in darkness. And when there’s no light, there’s nothing for existing telescopes to observe.

Yet astronomers tell me that one day, new and innovative telescopes may be able to see deeper into that darkness — to break through the barriers that even the mighty Webb Space Telescope won’t be able to see through. They dream of putting an observatory in a crater on the far side of the moon, or building one that can potentially detect ripples of warped space coming from the calamity of the Big Bang itself.

When they do, humans may finally be able to piece together a more complete timeline of the history of our universe. And is there any quest more human, or more meaningful, than the drive to understand where we come from?

The space we cannot see

Let’s start with something very obvious. When we look up at the night sky, we can see the stars because the universe is see-through. Light can travel hundreds of millions of years — billions, even — across the transparent void to reach us. Lucky for us, scientists can use this light to study the history of the cosmos, and our place in it.

But there was a time when our universe was not transparent but opaque. In the beginning, there was darkness.

“When the universe was first created, it was so hot after the Big Bang, atoms couldn’t exist,” explains Paul Hertz, NASA’s director of astrophysics. “It was just a plasma of subatomic particles.”

There’s no light shining through to us from this extreme early universe because light simply cannot travel through a plasma of particles tinier than atoms. Any light that existed then “would just go a very short distance before it would be scattered off some subatomic particle,” Hertz says.

Eventually, several hundred thousand years after the Big Bang, this plasma cooled and a bit of light broke through. Scientists call this light the cosmic microwave background — essentially the afterglow of the Big Bang — and observatories can see it in very dark places like Antarctica, the Atacama Desert, and in Earth’s orbit.

But this light represents only a small snapshot of the early universe, before stars or galaxies. It’s just a nearly uniform dispersal of matter (and dark matter). Somehow, from that starting point, we get everything we see in the universe today. 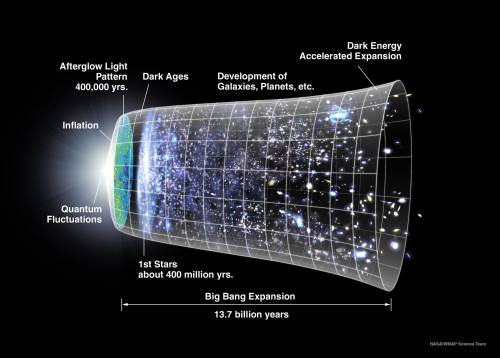 But soon (cosmically speaking), the universe was dark again. Shortly after the universe cooled, the cosmic dark ages began.

Back in the dark ages, the universe “was full of hydrogen and helium atoms and nothing else,” Hertz says. “And there was nothing to emit light. So it was still dark.”

What’s more, that hydrogen formed “a dense, obscuring fog of primordial gas,” as the National Science Foundation explains. If there was light anywhere, it would be shrouded in the fog.

Only a few hundred million years after the Big Bang was “the darkness of the universe … pervaded by light for the first time,” Casey says. Astronomers call this period “cosmic dawn,” when the fog lifted and the first starlight shone through the universe. Cosmic dawn, Casey says, permanently transformed the universe “from a dark place to a light place.” That’s the universe we still live in today.

Casey says scientists still don’t precisely know what lifted the fog. They suspect the earliest stars provided the energy needed. That’s what she and others will investigate with the James Webb Space Telescope. “We’re trying to see the first galaxies turn on, for the first time, and emit their light for the first time,” she says.

This is how, in the future, we might find out.

How special telescopes could see the invisible

How do you see a region of space from which no light emanates? Scientists, surprisingly, have some solutions to this problem.

One is to build a radio telescope on the far side of the moon (that is, the side that never faces the Earth). This type of telescope could help scientists peer into the dark ages, though not necessarily all the way back to the Big Bang.

It’s as though they were broadcasting a lonesome signal from near the beginning of time, which could make it through the fog.

“If you build the right kind of radio telescope, very large, very sensitive, then you would be able to detect the radio waves and we could study the universe before the first stars and first galaxies,” Hertz says. 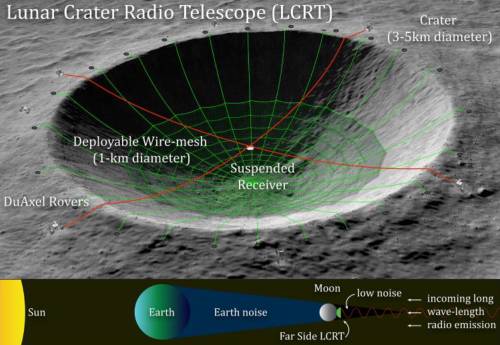 But we can’t detect these faint radio waves from Earth. All the radio transmissions that are produced on Earth would drown them out.

This is where the moon comes in — as a kind of giant shield. The moon is “thousands of miles of rock, so the radio waves can’t get through that,” Hertz explains. The far side of the moon is quiet enough for us to listen in.

Right now there are a few concepts for these moon telescopes, from one that nestles the telescope in a crater to ones that involve lunar rovers. There are currently no concrete plans to build and launch one.

Still, even a giant radio telescope on the far side of the moon could only take us so far. It couldn’t take us all the way back to the Big Bang, when the universe was just a dense plasma of particles.

The Unexplainable newsletter guides you through the most fascinating, unanswered questions in science — and the mind-bending ways scientists are trying to answer them. Sign up today.

Astoundingly, scientists know of something that could get us much closer to the beginning, to make observations of the very early, hot universe as it existed soon after the Big Bang. But it would take a very different type of telescope — one that can see gravitational waves.

The Webb, the Hubble, and even a future radio telescope on the far side of the moon are all telescopes that capture some form of electromagnetism (which include visible light, infrared light, radio waves, microwaves, ultraviolet, and so on).

Gravitational waves, by contrast, are ripples in the very fabric of spacetime. They form as a consequence of the fact that mass can bend space.

And so when massive cataclysms happen in space (say, when two black holes collide), space ripples a bit like after a stone is thrown into a pond. It’s “like flapping space,” Hertz explains. “Space will propagate that movement as waves.”

Gravitational waves are really weird. They literally distort space as they move — shrinking it, stretching it — as if it were an image in a funhouse mirror. The thing is, when these waves reach the Earth, they are almost imperceptibly small, making changes on scales smaller than an individual atom.

“We need to have a gravitational wave observatory where the two ends of it are a million kilometers apart,” Hertz says.

And where do you put such an observatory? In space!

Currently, NASA and the European Space Agency have plans for a space-based gravitational observatory called LISA (the Laser Interferometer Space Antenna), to launch in 2034. It will be a constellation of three satellites that form a triangle, with each side measuring a whopping 2.5 million kilometers.

“It measures whether the distance between the satellites has changed,” Hertz explains. “And if it changes, it’s because a gravitational wave went by and shrank or expanded space.”

Some of those gravitational waves could be coming from that hot cauldron of the post-Big Bang universe.

Scientists build telescopes to learn about the history of the cosmos and where we fit into it. When we build observatories to peer into the cosmic dark ages, into the fiery heart of the Big Bang, humans fill in the blank spaces in our timeline of the evolving universe. Telescopes help answer the question: Why does the universe look the way it does today?

We humans aren’t separate from the universe. We are of it. The Big Bang, the cosmic dark ages, cosmic dawn … all of this history led to us.

In this light, building telescopes is a means to make our corner of the universe self-aware.

There’s a virtuous cycle here. The Webb Space Telescope will generate incredible images that are only going to inspire more people to get interested in science, to be curious about the universe they inhabit. Those people may dream up the next barrier-breaking telescope, and the cycle will continue.

There will never be one ultimate telescope that can see everything humans want to see. “Each telescope, whether it’s on Earth or in space, is designed to do a particular kind of science,” Hertz says. Even the mighty LISA, capable of peering back to near the very beginning of time, would be blind to some things, like starlight. Other future telescopes might not set their gaze on the beginning of time, but rather on the many planets that revolve around other stars, as they search for another Earth.

“We’re just a bunch of humans floating on a rock through space,” Casey says. “It’s wild, when you think about it, that we’re able to even piece together what happened before the Earth or the sun even existed.”

Telescopes of the future will bring even more of that history into focus.