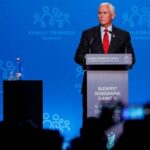 Pence hopeful the Supreme Court will restrict abortion in US 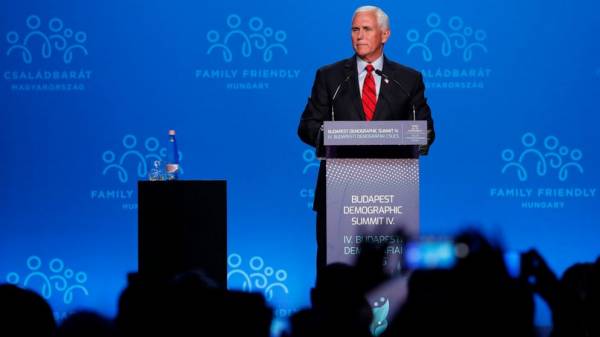 BUDAPEST, Hungary — Former U.S. Vice President Mike Pence said Thursday that he is hopeful the new conservative majority on the Supreme Court created during his and President Donald Trump’s administration will soon overturn abortion rights in the United States.

Pence spoke at a forum devoted to demographics and family values in Budapest, Hungary, where conservative leaders from central Europe expressed their anxieties about falling birthrates in the Western world and discussed ways to reverse the trend.

“We see a crisis that brings us here today, a crisis that strikes at the very heart of civilization itself. The erosion of the nuclear family marked by declining marriage rates, rising divorce, widespread abortion and plummeting birth rates,” Pence said.

The Budapest Demographic Summit, which was first held in 2015 and takes place every two years, has become a platform for leaders to denounce illegal migration and urge families to have more children.

Hungary under Prime Minister Viktor Orban has become a political model for right-wing leaders and commentators across the Western world who admire his hard-line opposition to illegal migration and his support for conservative social values.

Tucker Carlson, the most popular host on the right-wing Fox News Channel, spent a week broadcasting from Budapest in August where he heaped praise on Hungary under Orban’s rule, and made a visit by helicopter to a fence along the country’s southern border.

On Wednesday, the Hungarian state news agency reported that Budapest would next year host the Conservative Political Action Conference or CPAC, an annual gathering of primarily U.S. conservative activists and politicians.

While Orban’s approach to immigration has earned him the admiration of many Western conservatives, they overlook his authoritarian streak — his consolidation of Hungary’s media, erosion of democratic institutions and discrimination against minorities, including asylum seekers and LGBT people.

Pence praised how abortion rates have fallen under Orban’s leadership. And he voiced hope that things would change in the U.S. as well, recalling that the administration in which he served as vice president appointed 300 conservative judges to the federal courts, including three new justices to the Supreme Court.

“We may well have a fresh start in the cause of life in America,” Pence said. “It is our hope and our prayer that in the coming days, a new conservative majority on the Supreme Court of the United States will take action to restore the sanctity of life at the center of American law.”

Pence has spent the months since leaving office building a post-White House operation that has included launching a new political advocacy group, delivering speeches, fundraising and bolstering relationships that could help him should he choose to run for president in 2024.

He has tried to position himself as a conservative who can appeal both to his white Evangelical Christian base as well as Trump supporters and those who may have been fond of Trump’s policies, but not his pugilistic style.

Still, Pence faces an uphill battle after he drew Trump’s ire by declining to block the certification of his 2020 election defeat, which the former president still refuses to accept.

Orban, the Hungarian leader who faces re-election next year, lamented that conservatives including Trump and Benjamin Netanyahu have faced electoral losses recently. But addressing Pence, he said: “Vice President, we wish you a comeback as soon as possible.”

Orban also described how Hungary, under his rule since 2010, has used the state “to shape demographic processes” by restricting migration and using tax breaks and other state instruments to ensure that having children is beneficial economically for families.

Other leaders from the region also addressed the forum, including Serbian President Alexander Vucic, who voiced his concerns about Europe’s declining population growth relative to the rest of the world. If things continue as they are, he said, “within 30 years Nigeria — just one African country — will have more inhabitants than the entire European Union, more inhabitants than the United States of America.”

Pence spoke at a pivotal time for abortion rights in the U.S. Republican-led state legislatures have enacted increasingly restrictive laws and the Supreme Court’s conservative majority recently allowed a Texas law banning most abortions to go into effect.

The court is due next to consider a Mississippi ban on most abortions after 15 weeks.

Anti-abortion activists hope that the court will use that case to overturn Roe v. Wade, the landmark 1973 ruling which ensured a woman’s constitutional right to an abortion.

Previous : Liverpool move forward with Anfield Road Stand expansion plans
Next : Is the delta variant of the coronavirus worse for kids?