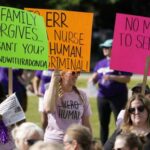 RaDonda Vaught, whose criminal prosecution for a fatal medical error made her case a flashpoint in national conversations about nursing shortages and patient safety, was sentenced on Friday to three years of probation in a Nashville criminal court. After the probationary period, she could ultimately have her conviction dismissed.

Vaught had been convicted of criminally negligent homicide and gross neglect of an impaired adult, which together carried a potential prison sentence of up to eight years.

In late 2017, Vaught, a nurse, mistakenly administered the wrong medication to patient Charlene Murphey while Murphey awaited a radiologic study at Vanderbilt University Medical Center. Murphey died as a consequence of the error, and an investigation later found that multiple patient safeguards that should have existed in the hospital had been absent or failing at the time of the event and were partially responsible for her death.

Vaught’s errors included removing the wrong medication from one of the hospital’s electronic prescribing cabinets, overlooking several warnings on the medication vial, and not monitoring Murphey’s vital signs after administering the medication.

What made Vaught’s case notable was that she was prosecuted in criminal court, a decision made by the Nashville district attorney. Most nursing malpractice cases are disciplined through state nursing boards, which can revoke professional licenses. If legal action is taken in nursing errors, it is generally through civil courts, where patients and families can obtain financial compensation.

A nurse made a fatal error. Why was she charged with a crime?

Vaught’s case was also notable because while she was charged with a crime, her employer — Vanderbilt University Medical Center — faced fewer consequences.

A federal investigation found that at the time Vaught made the error, gaps in the hospital’s patient safety policies and systems constituted an immediate threat to patients.

While the hospital settled a civil case out of court with Murphey’s family, it has not been held criminally liable. And while the Tennessee health department revoked Vaught’s license, it did not punish the hospital, although the Tennessee Bureau of Investigation found multiple instances of wrongdoing and cover-ups on the hospital’s part.

Although the sentencing was lenient, patient safety advocates and nursing groups are upset about the case, and say it sets a bad precedent: because Vaught individually took the fall for a systematic failure.

For decades, scholars have understood that keeping patients safe requires continually improving the systems that prevent and catch medical errors before they happen. Critically, those systems cannot improve if the people within them don’t feel safe reporting problems.

One of the biggest concerns among patient safety experts is that severe punishment for medical errors — as in Vaught’s case — will lead to reduced error reporting by other nurses due to fear of being fired, or fear of prosecution. That could lead systemic problems to persist unfixed, which would be worse for patient safety.

In an April interview, Robert Gatter, a health law expert at Saint Louis University, said Vaught’s prosecution was a smokescreen that distracted from her employer’s inadequate safety systems. “They can forever now point to this person and say, ‘Wow, she is so bad,’” he said, rather than being held accountable for having a broken patient safety infrastructure.

Vaught’s case is one of several recent cases in which criminal charges were levied against nurses in settings ranging from jails to nursing homes. Many nurses say this trend, combined with the stresses of the pandemic and preexisting nursing shortages, has exacerbated already low morale among nurses. 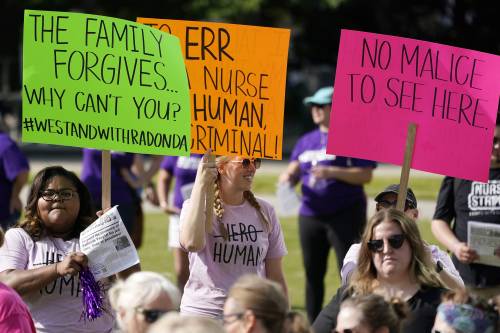 Anecdotally, their disillusionment is leading many nurses to leave patient care roles. But there are signs Vaught’s verdict might be an inflection point for broader patient safety efforts.

Kedar Mate, a physician who is president of the Institute for Healthcare Improvement, recalls a recent anecdotal example of the case’s potential chilling effect among medical professionals. He was in an audience for a talk on patient safety in a room full of doctors and nurses. When the speaker asked how many of the attendees had reported a medical error, most of the hands in the room went up — and when he asked how many would do it now, in light of the Vaught case, most of the hands went down. “It’s had a very significant effect,” he said, although there isn’t hard data to cite here.

Mate said several hospital CEOs — for example, the leadership of Northern Virginia’s Inova Health — are trying to head off that concern by communicating directly with employees. “Health system leaders are issuing statements, supporting their staff to come forward transparently to report — in essence, saying that ‘We hear and see what’s going on in Tennessee. In our system, we value transparent, candid, open, honest reporting of near misses and adverse events.’”

It’s hard to know what the outcome of that outreach will be. Rates of medical errors — and measures of staff willingness to report them — are only revealed over time.

“We’re not going to know for a little while whether this is going to have an effect,” said Mate of Vaught’s case.

The case is inspiring calls for policies that support nurses, and patients

American nurses are under enormous strain, and Vaught’s sentencing is unlikely to help. However, the case has directed attention to policies and legislations that would help prevent medical errors in the first place.

For one, the case has energized efforts to establish a National Patient Safety Board (NPSB), which would function much the way the National Transportation Safety Board does by reviewing data on medical errors and close calls with the highest likelihood of causing patient harm. The NPSB would then make recommendations for solutions and corrective actions that would prevent further bad outcomes for patients.

Karen Feinstein, leader of the advocacy coalition supporting the board’s creation, said she now uses Vaught’s case as an example of why the agency is necessary. “If you had an NPSB,” she said, “I don’t believe an accident like this would happen.”

An estimated 7,000 to 9,000 people die in the US each year as a result of a medication error. With a national board in place, many factors that contributed to the error that killed Charlene Murphey could have been identified in advance, including persistent software problems that weakened automated safety checks during medication dispensing, and Vaught’s distraction by an orientee (Vaught had been multitasking when the error occurred, helping with nursing needs across her unit and orienting a new employee).

Nurse-to-patient ratios are an important determinant of patient safety, and bills aimed at ensuring safer staffing ratios are making their way through the House and Senate. At the National Nurses March in Washington, DC, yesterday, many of those marching expressed support for the bills. The powerful hospital lobby is likely to oppose the legislation, lowering its chances of success, said a senior congressional staffer who requested anonymity to speak candidly about the bill. But nurses and nurses unions in several states are advocating for its passage.

On the day of the sentencing, hundreds of nurses gathered across the street from the Nashville municipal courthouse to support Vaught, a purple banner reading “We are nurses not criminals” on display. They held hands as they listened to a live broadcast of Judge Jennifer Smith’s decision, and erupted in cheers as the sentence was read.

Julie Griffin, a Florida nurse who was fired in 2018 after making complaints about unsafe staffing and monitoring procedures at the medical center where she worked, attended the rally. After the sentence was handed down, she said she felt ambivalent. “I mean, it’s a great verdict,” she said, “on a charge that should never have been imposed.”

The sentence notwithstanding, the case had already done damage to the nursing profession, said Griffin. Nurses were walking away from the profession before Vaught’s April verdict, but the case has intensified the sense of alienation for many, she said.

“The health care system needs to look in towards itself and start promoting a culture where nurses are allowed to speak up — to effect change before these things happen,” she said.

Previous : Why monkeypox isn’t like Covid-19
Next : The Importance of Scale